A Texas couple that has sued Range Resources Corp. for allegedly contaminating its drinking water with hydraulic fracturing (fracking) on Thursday lost a bid for dismissal of the company’s countersuit, which alleges that the couple participated in a conspiracy to defame Range.

In response to a lawsuit filed by landowners Steven and Shyla Lipsky, Range last year told the 43rd District Court in Parker County, TX, that the Lipskys and environmental consultant Alisa Rich of Wolf Eagle Environmental conspired to incriminate the company for the occurrence of natural gas in in the couple’s well water. The company has maintained — and the Railroad Commission of Texas (RRC) has found (see Shale Daily, Feb. 10, 2011) — that the gas in the Lipskys’ well came from the Strawn Formation and not the deeper Barnett Shale targeted by Range’s Barnett Shale gas well.

On Thursday the 43rd Judicial District Court in Texas sided with Range in denying the Lipsky’s motion to dismiss Range’s countersuit.

“The court references with concern the actions of Mr. Steven Lipsky, under the advice or direction of Ms. Alisa Rich, to intentionally attach a garden hose to a gas vent — not to a water line — and then light and burn the gas from the end nozzle of the hose,” wrote presiding judge Trey E. Loftin. “This demonstration was not done for scientific study but to provide local and national news media a deceptive video, calculated to alarm the public into believing the water was burning.”

Range maintains in its lawsuit (see Shale Daily, July 20, 2011) that Rich conspired with the Lipskys’ to do an end-run around the RRC, which already was investigating the alleged well contamination, to gain an audience with the Environmental Protection Agency (EPA), which Rich believed would be more sympathetic to their cause.

“Rich’s actions, with which the Lipskys agreed, approved, and/or acquiesced, resulted in losses to Range, and therefore its shareholders, in an amount in excess of $3 million…in expenditures and other harm to its business reputation,” the company said.

Loftin said in his order Thursday that Rich deliberately sought to stir up EPA Region 6 administrators.

“There is further evidence that Rich knew the regional EPA administration and provided or assisted in providing additional misleading information (including the garden hose video) to alarm the EPA. Moreover, the emails in question [between Rich and the Lipskys] which refer to this deceptive garden hose demonstration as a ‘strategy’ appear to support that a ‘meeting of the minds’ took place and that a reasonable trier of fact could believe, together with other evidence, that the elements of a conspiracy to defame Range exist.”

Range said in its countersuit against the Lipskys that instances of flaming well water purported to be documented by Lipsky actually involved the ignition of natural gas at the end of a garden hose that was connected to a well vent specifically intended to release naturally occurring gas from the Lipsky water well.

Further, Range said the Lipskys have enjoyed a break in ad valorem taxes on their multi-million-dollar property of about $44,000 per year due to the property’s devaluation based on the couple’s well water contamination claims.

While Range was later exonerated by Texas regulators, the EPA cited the company for the alleged well water contamination in December 2010 (see Shale Daily, Dec. 9, 2010). Range is still fighting the EPA.

“We’re pleased with the decision and look forward for a jury to hear the case,” Range spokesman Matt Pitzarella said Friday.

Since the Range case, the controversy over the potential link between fracking and aquifer/well water contamination has moved to Wyoming, where EPA has come the under scrutiny of state regulators and federal lawmakers for its preliminary findings that fracking may have contaminated water in that state (see Shale Daily, Feb. 16; Feb. 10). 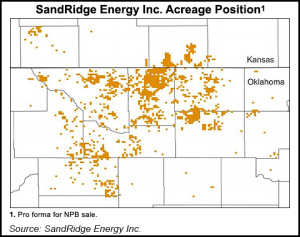 SandRidge Energy Inc. carried out zero drilling activity on its assets in the Midcontinent and in Colorado last year, causing production to wither, according to its 2020 annual report. The company’s output fell by nearly 25% in 2020 to 8.7 million boe comprising 24% oil, 45% natural gas and 31% natural gas liquids (NGL). In…