In a second investigation into a drilling waste injection well and its potential link to seismic activity, Railroad Commission of Texas (RRC) examiners said in a proposed decision that a “preponderance of the evidence” does not support a “likely” link between waste injections and small earthquakes. 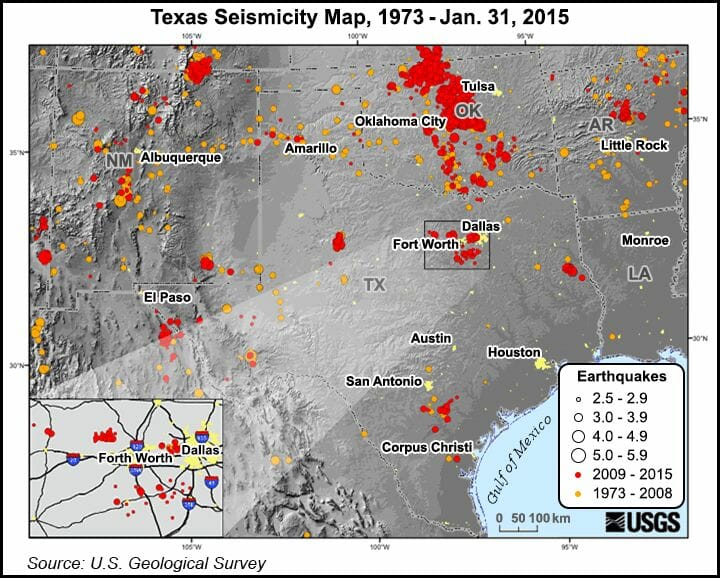 The investigation was of a well operated by EnerVest Operating LLC (the EnerVest Briar Lease Well No. 1). Recently, examiners reached a similar conclusion in an investigation of an injection well operated by XTO Energy Inc. (see Shale Daily, Sept. 2). Assuming the decisions are adopted by the commission, the wells will be allowed to continue operating.

However, as was the case in the XTO well investigation, examiners also said the evidence in the EnerVest well case “…does not support a finding of fact that…[the well]…is not contributing to seismic activity in the Azle-Reno [TX] area, or that the seismic activity is solely the result of natural tectonic processes.”

The RRC examiners’ findings in both cases appear to contradict those of researchers at Southern Methodist University (SMU), who said last spring that high volumes of wastewater injection combined with saltwater extraction from natural gas wells is the “most likely cause” of earthquakes occurring near Azle from late 2013 through spring 2014 (see Shale Daily, April 21).

In calling for a show cause hearing on the XTO and EnerVest injection wells, RRC commissioners said they were responding to the SMU study (see Shale Daily, April 24).

The proposed decision is not final. Parties to the case have 15 days to file exceptions to the examiners’ recommendations. Replies are to be taken during the subsequent 10 days. A final decision by RRC commissioners is to follow.