After a 4.0-magnitude earthquake in North Texas on Thursday, four area drilling waste disposal well operators have shut down operations at five wells while data on seismicity in the area is collected. Meanwhile, Oklahoma injection well operators are living in a different world following quake-minded regulatory initiatives. 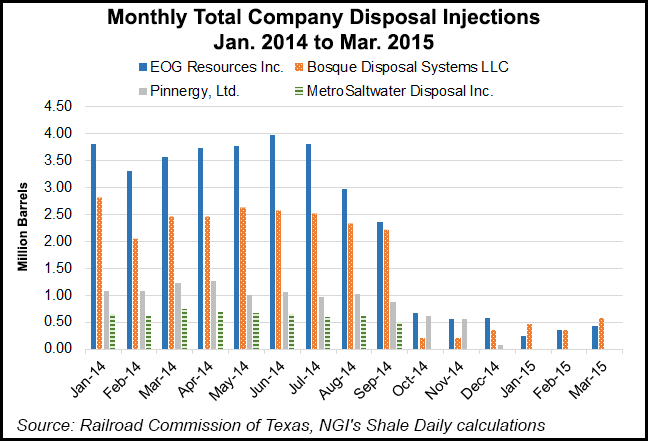 The Railroad Commission of Texas (RRC) told the companies that they would be required to conduct well and reservoir testing. Five wells are within 100 square miles of the quake’s estimated epicenter. The operators are Bosque Disposal Systems LLC, EOG Resources Inc., MetroSaltwater Disposal Inc. and Pinnergy Ltd.

RRC staff are working with seismic researchers and industry to collect seismic data and information about oil and gas activity in the region. “We take the issue of seismicity very seriously and want to move quickly to better understand if there are actions the commission should require of operators to protect the public, up to and including shutting down well operations,” said Craig Pearson, RRC seismologist. “More data is always useful in making these kinds of critical decisions that impact the public and the industry.”

Following Thursday’s earthquake near Venus, TX, which is about 30 miles southwest of Dallas, the RRC dispatched inspectors to the area to inspect oil and gas wells and disposal wells for any damage resulting from the event. No damage to infrastructure was found. The quake was the largest one in recent memory and one of about two-dozen to hit the area since 2009.

Last year, the RRC adopted rules allowing the collection of such data related to seismicity. The injection well operators have voluntarily agreed to temporarily shut down wells to conduct the testing within a matter of days. The testing will help determine the effect of injection operations on pressures within subsurface rock formations, the RRC said.

Last Month the RRC initiated proceedings that could lead to the permanent shutdown of two waste disposal wells near Azle, TX, that are thought to be linked with a swarm of earthquakes in the area (see Shale Daily, May 4; April 24).

Like The Barnett Shale region of Texas, Oklahoma has experienced an increase in seismic activity thought to be related to waste injection wells used by the oil and natural gas industry (see Shale Daily, April 22). Directives issued by the Oklahoma Corporation Commission’s Oil and Gas Conservation Division (OGCD) in March have resulted in “significant” changes in the operation of the oil and gas wastewater disposal wells viewed by researchers as having the highest potential for causing triggered seismicity, OGCD said Monday.

So far under the new directives, more than 50 disposal wells have had to shut down operations and reduce total depth to provide disposal into only the Arbuckle formation to mitigate the potential risk. About 150 other disposal wells have reduced their volumes by 50%, and other wells are keeping volumes below 1,000 b/d.

“While our primary concern is the high-volume wastewater disposal wells because they pose the greatest potential risk, the lower-volume Arbuckle wells are also subject to the same directives and must be addressed,” said OGCD Director Tim Baker. “It’s also important to understand that these actions are based on quickly addressing the areas of highest potential risk as defined by the research. We continue to work with the Oklahoma Geological Survey and other researchers on this critical issue and our ‘traffic light’ system. All options available to us to address this are on the table. There is no issue more important to us.”

The “traffic light” system was first put in place in 2013 in response to the concerns over the possibility of earthquake activity being caused by oil and gas wastewater disposal wells in Oklahoma. It has been in a state of constant evolution since then as new data becomes available, OGCD said.