At a time when the field of proposed oil export terminals is narrowing, a subsidiary of Dallas-based Sentinel Midstream LLC has garnered additional support for developing a project near Freeport, TX. 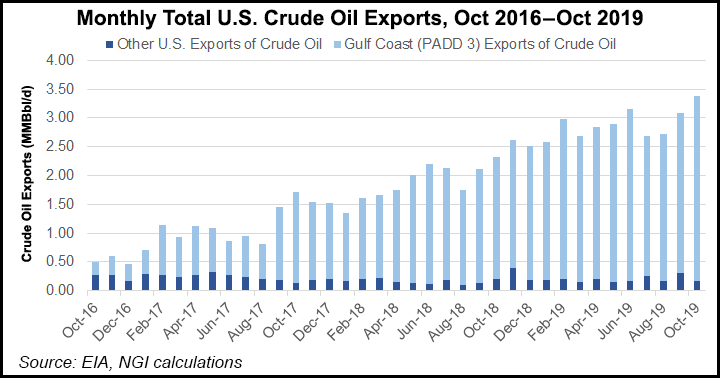 As the project continues to move forward with the license application process, Sentinel “will utilize Freepoint’s substantial global and commercial resources to create value for their customers,” said Sentinel CEO Jeff Ballard. “Through their Asian market focus, Freepoint will lead efforts to meet the growing demand from Asian refineries for U.S. produced crude oil.”

Texas GulfLink would include an onshore oil storage terminal connected by a 42-inch diameter pipeline to a manned offshore platform about 30 miles off the Texas coast. The project also is being funded by Cresta Fund Management, which was formed in 2018.

“Freepoint recognizes the significant experience that the Texas GulfLink team has in deepwater port projects and the team’s ability to construct and operate to the highest standards,” said Freepoint CEO David Messer. “The Texas GulfLink project will help meet the demands our customers have to reliably source U.S. crude oil through a neutral infrastructure export option.”

Texas GulfLink’s momentum comes as Enbridge Inc. earlier this year dropped out of the race to build and operate a terminal that also would be offshore the Upper Texas coast. One partner, Kinder Morgan Inc., already bowed out last March. However, Kinder remains a partner in Enterprise Products Partners LP’s proposed Sea Port Oil Terminal, which would be designed to load VLCC at rates of around 85,000 bbl/hour or up to 2 million b/d.

Carlyle Group in October pulled out of the $1 billion crude export terminal planned for South Texas that it was jointly developing with the Berry Group.

Houston-based Axis Midstream Holdings LLC, Phillips 66 and Trafigura Group Pte Ltd. still have proposals on the table, all which would be located in South Texas.

A year ago, the U.S. Army Corps of Engineers awarded its first contract for the Corpus Christi Ship Channel Improvement Project in South Texas. The export hub in Ingleside, in the northeast corner of the Port of Corpus Christi, can partially load a VLCC.

Fully loading a VLCC in the United States now requires multiple ship-to-ship transfers, which are performed in lightering zones out to sea. The Louisiana Offshore Oil Port, aka LOOP, can accommodate fully loaded VLCC in its lightering zone.