Coming off a successful nonbinding open season, Boardwalk Pipeline Partners LP is holding a binding open season for its Northern Supply Access expansion of Texas Gas Transmission, a project that would provide for receipts of Marcellus and Utica shale gas seeking markets in the Southeast and Gulf Coast. 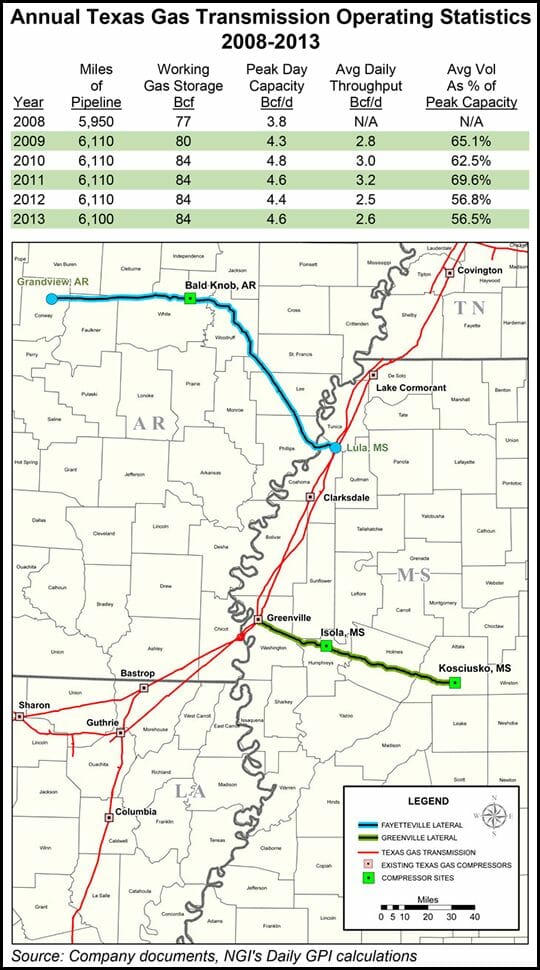 Boardwalk’s Southeast Market Expansion project is expected to be online in November, providing new firm service of industrial and power generation markets in Mississippi, Alabama and Florida. “In addition to the new facilities, customers of this expansion project will have access to diverse supplies available across our Gulf South system,” the pipeline said.

Texas Gas is offering 584,000 MMBtu/d of capacity from a combination of receipt points including Texas Eastern, Dominion, and Rockies Express (REX) pipelines at Lebanon, OH, and from REX pipeline at Smith Valley, IN. Potential receipt points with ANR Pipeline at Smith Valley and EQT Midstream at Lebanon may provide additional supply options for the project. The projected in-service date is April 1, 2017.

In January Texas Gas concluded a successful binding open season for backhaul capacity from receipt points in the Lebanon area to delivery points in Texas Gas Zone 1 and Zone SL. The pipeline sold 626,000 MMBtu/d of firm capacity during this open season.

The current binding open season is to secure support for firm transportation capacity from “mutually agreeable” receipts in Zones 4 and 3 for deliveries into Zones SL, 1, 2, 3 and 4. “The capacities…will be made available through a combination of a new compressor station, installation of new units at existing compressor stations, pipeline facility modifications, and installation of expanded or new receipt and delivery interconnects,” the pipeline said. There is a Zone 4 to Zone 1/SL volume cap of 584,000 MMBtu/d.

“Facilities modifications contemplated by this binding open season will allow Texas Gas to flow as a bidirectional system and provide the ability to serve future growth in the power generation, industrial and local distribution markets, as well as the new LNG export facilities along the Gulf Coast,” Haynes said. “Over the last year, Texas Gas has taken steps to reposition itself to serve emerging market needs…”

As production in the Marcellus and Utica climbs (see Shale Daily, April 25), multiple solutions for the takeaway capacity shortfall out of the Appalachia region have been proposed or are in the works. REX recently filed with the Federal Energy Regulatory Commission for a project that would create 1,200,000 Dth/d of east-to-west firm capacity within the pipeline’s Zone 3 (see Daily GPI, June 23; April 30). Kinder Morgan’s Tennessee Gas Pipeline has been providing capacity out of the region, too (see Daily GPI, April 22). Recently, TransCanada Corp.’s ANR secured almost 2 Bcf/d of firm commitments on its Southeast Main Line (see Shale Daily, March 31).

Annual throughput volumes on Texas Gas received a boost several years ago when its Fayetteville and Greenville laterals came online in the 2008-2010 time frame. However, average volumes though the system have declined more recently, moving from 3.2 Bcf/d in 2011 to 2.5 Bcf/d and 2.6 Bcf/d in 2012 and 2013, respectively.