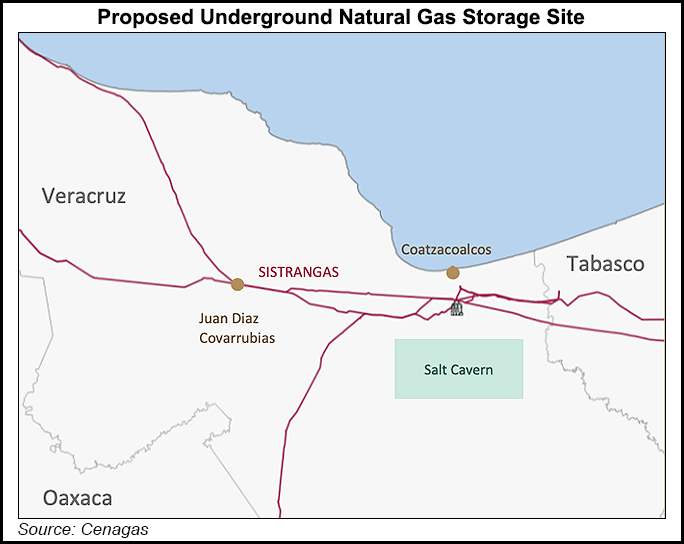 Ortiz addressed the issue on Friday during a fourth-quarter earnings conference call for the Mexico unit of San Diego, CA-based Sempra Energy. IEnova develops, owns and operates energy infrastructure in Mexico, with $10.5 billion in assets and more than 1,400 employees as of 2020.

The lesson of the Texas energy crisis for Mexico is “that we need to have a diverse and reliable power system,” she said, for which access to cheap gas from the United States is a crucial component.

But in order to have reliable gas supply, “it’s critical to have storage in Mexico,” she continued, highlighting that Mexico has no underground gas storage capacity. “I think it would be very important for Mexico to consider it as part of its energy security planning.”

An initiative by Mexico’s previous government to develop 10 Bcf of underground storage capacity at the depleted Jaf gas field in Veracruz state was mothballed by the current administration of President Andrés Manuel López Obrador.

Ortiz also said that, “as Mexico continues to increase its oil and gas production, hopefully we will also see additional gas being produced in Mexico for generation.” Expanding Mexico’s power transmission grid and renewable energy capacity also will be vital for enhancing energy security, she said.

During the recent cold snap, “we did see a bit of a reduction in gas flows to Mexico coming out of Texas as a result of increased demand in Texas related [to] the winter storm, but we actually did not have any disruption on the operations of the pipelines in Mexico,” Ortiz said. “So all of our pipelines were operating normally, although gas flows were reduced.”

As for a proposed, highly controversial legislative reform to give dispatch priority to state-owned power utility Comisión Federal de Electricidad (CFE) over private sector generators, Ortiz said IEnova is “watching very, very closely to understand what the final form of this initiative is,” adding, “we need to see the version that is the truth in order to determine our strategy going forward…from a commercial angle, regulatory angle and legal angle.”

Ortiz said the initiative “assembles all of the previous regulatory changes that we have seen mostly throughout 2020,” adding, “we’re already taking steps to protect ourselves against those changes.”

In addition to its industrial and power generation customer base, IEnova also supplies gas to around 130,000 residential customers in Mexico, Ortiz said, explaining that IEnova has been “working around the clock to try to minimize the impact of the gas shortage, and primarily support CFE in any way we can to…try to stabilize gas flows into their plants…”

The outlook appears brighter for the Energía Costa Azul liquefied natural gas export project in Baja California state, for which a final investment decision was reached in late 2020.

The project includes construction of a 220-mile pipeline to transport gas sourced from the United States to the terminal.

“We are in the permitting process, acquiring rights of way, performing engineering and selecting contractors” for the pipeline, Ortiz said.

Ortiz said IEnova is working with Mexico’s interior ministry and with CFE to resolve a dispute with a local faction of the Yaqui indigenous community that opposes the Guaymas-El Oro pipeline in Sonora and Sinaloa states. The 205-mile pipeline entered operation in May 2017 but has been inactive since August 2017 due to the dispute.

Ortiz said, “I do not have a clear timeline yet as to when it will be resolved, but we are working very, very closely with CFE.”

The California Public Utilities Commission (CPUC) has proposed regulations to strengthen oversight of the state’s investor-owned utilities. The proposal, which would need to be approved by CPUC commissioners, would establish specific metrics to evaluate Pacific Gas and Electric Co. (PG&E) operational safety performance. It would also adopt 10 safety performance metrics, building on those previously…