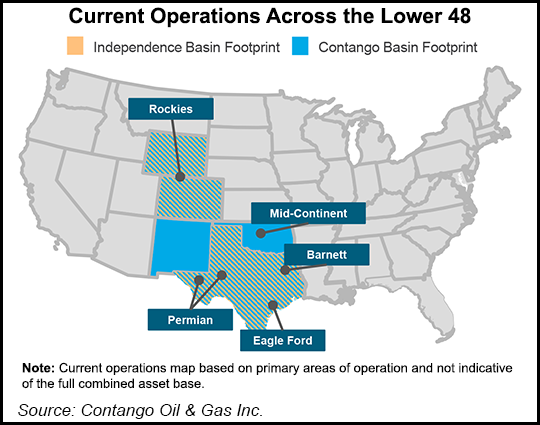 The E&Ps produced a combined 111,000 boe/d of oil and gas in the first quarter across several major Lower 48 basins.

“When John and I joined Contango nearly three years ago, we believed an upstream acquisition platform focused on alignment of incentives, low costs and an investor’s mindset could generate superior shareholder returns,” said Contango CEO Wilkie Colyer. He added, “In David’s team at KKR and Independence, we have found like-minded individuals with a scaled and complementary asset base.

“This partnership helps to accelerate our inorganic growth strategy with a larger balance sheet and lower cost of capital for the benefit of all stakeholders.”

The yet-to-be-named combined company would become KKR’s “primary platform for pursuing upstream oil and natural gas opportunities,” Contango said. The transaction would merge Independence with an operating subsidiary (OpCo) of a new parent company, which would become a publicly traded entity at closing. Contango would become a subsidiary of the OpCo.

Once the transaction is completed, Independence shareholders would own about 76% of the E&P with Contango owning 24%. The transaction is expected to close late in the third quarter or early in the fourth quarter.

The company is expected to have an initial equity market capitalization of about $4.8 billion and enterprise value of about $5.7 billion, based on Contango’s closing stock price on Monday (June 7). Contango projected the new E&P would have unlevered free cash flow of $375-400 million in 2022.

David Rockecharlie, partner and head of KKR Energy Real Assets, is to serve as CEO.

Contango’s recent merger and acquisition activity has included an all-stock tie-up with Mid-Con Energy Partners LP and the purchase of upstream assets in the Big Horn, Permian and Powder River basins.