The Lone Star State’s exploration and production (E&P) economy enjoyed a year of recovery in 2021 on the heels of nearly two years of contraction, according to the latest Texas Petro Index (TPI). 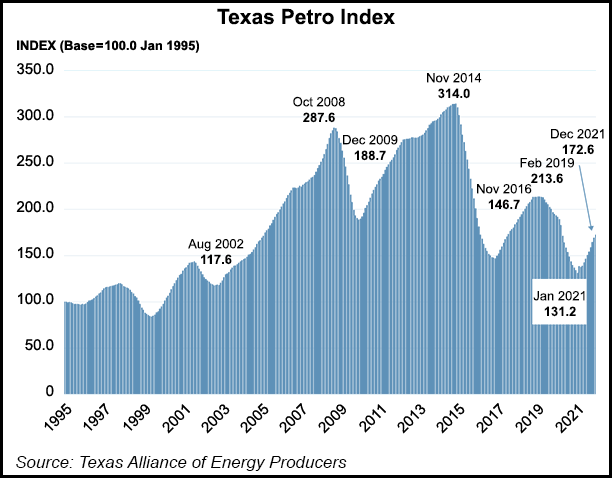 “The Texas upstream oil and gas industry endured a punishing two-year contraction, the second year of which was at the hands of Covid, which finally came to an end with the January 2021 trough in the Texas Petro Index,” said Ingham.

“The index has been steadily on the rise since then with higher prices, a growing rig count and a return to at least modest growth in industry employment.”

The index still “remains well below its pre-contraction level,” as the pandemic cut into demand, Ingham noted. The December index was about 19% below the most recent cyclical peak of 213.6, established in February 2019.

“Assuming continued steady growth in upstream activity levels in Texas in the coming year, the TPI is on track to reach and surpass its previous peak in late 2022,” said Ingham.

The index achieved its all-time high of 314.0 in November 2014, but it is unlikely to reach that level again because of the “extraordinary increases in efficiency and productivity,” he said.

“Simply put, fewer rigs, employees and other resources are required to produce record and growing volumes of crude oil and natural gas, and even as production continues to grow, other upstream indicators remain well below prior levels, keeping the index in check.”

All components of the index trended higher last year, primarily because of the oil price recovery following the sharp declines of 2020.

“Daily natural gas production in Texas moved into record territory in November 2021 at over 30.6 Bcf/ month,” Ingham noted. The gas output in November surpassed the prior record of 30.5 Bcf/month set in January 2020.

Crude oil production exceeded 5 million b/d in December, according to preliminary estimates.  Oil output had reached record levels in early 2020 at more than 5.4 million b/d before declining by 22% from March to May 2020, down almost 1.2 million b/d.

“Assuming continued upside price support and steady growth in production, Texas crude oil production is on target to surpass prior peaks and move into record territory once again sometime in the second half of 2022,” Ingham noted.

Texas Permian production, as assessed using data from Railroad Commission of Texas districts 7C, 8 and 8A, exceeded 4 million b/d for the first time in December, surpassing the previous record of 3.78 million b/d in March 2020.

“Record or near-record production for crude oil and natural gas in Texas, while other upstream indicators are nowhere near record levels, tells a fantastic story about what Texas oil and gas producers from large to small have been able to achieve on behalf of Texas, U.S. and foreign consumers,” said Ingham.

“While we may wish for higher rig counts, industry employment and payrolls, the purpose of any economy is to meet the wants and needs of its consumers. The U.S. oil and natural gas industry, led by Texas, has done and continues to do an extraordinary job of providing abundant and affordable energy to power the economy and the daily lives and work of US households and businesses.”

More than 8,700 original drilling permits were issued in 2021, an increase of nearly 40% year/year, which was the lowest in the history of the TPI analysis.

In addition, “nearly 18,600 direct upstream oil and gas jobs have been added thus far in the current expansion, including nearly 16,500 over the last 12 months. However, that follows the loss of over 83,000 jobs over the course of the entire contraction, 63,000 of which were shed during 2020 alone.”