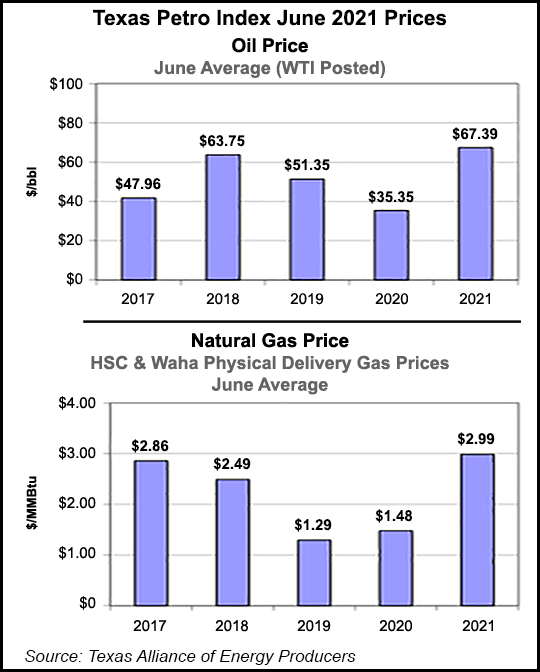 The index is calculated based on a group of exploration and production (E&P) indicators. They include wellhead prices, rig counts, drilling permits, well completions and volume/value of Texas production, as well as employment. The TPI is calculated using a base of 100 in January 1995; it reached an all-time high of 314 in November 2014.

The first leg of the downturn in the Texas upstream began late in 1Q2019 as oil prices contracted, leading to reduced activity into early 2020. The impacts from Covid-19 then led to sharper declines, Ingham noted.

“The 2019 contraction was no minor event, with significant declines in activity and about 20,400 jobs lost in the Texas upstream sector,” he said. “But that paled in comparison to the Covid decline in 2020, during which the statewide rig count dropped to unprecedented lows and another 61,000 Texas oil and gas E&P jobs were lost between February and September.”

After falling below $10/bbl in April 2020, oil prices began to recover, but they did not return to early 2020 levels until the first two months of this year.

“The statewide rig count, having reached 533 on average in the fourth quarter 2018, ultimately declined to an average of 105 in August,” the Alliance report noted. Still, Texas oil production continued to increase through March 2020, eventually peaking at a record 5.4 million b/d. In April and May 2020, though, output fell by more than 1 million b/d.

For example, natural gas prices averaged $2.99/MMBtu in June, compared to $1.07 in March 2020. Prices are at their highest level since January 2018, except for the spiking gas prices in February in response to Winter Storm Uri.

In addition, posted West Texas Intermediate crude averaged $67.39 in June versus $14.68 in April 2020. Prices today are at their highest level since November 2014.

“Estimated crude oil production in Texas averaged 4.82 million b/d in June,” the Alliance report said. “That means about 418 million b/d have been added back to statewide production of the over 1 million b/d lost from March to May 2020.”

“That suggests the addition of about 14,200 of the nearly 81,500 jobs lost over the course of the entire contraction,” the report indicated.

According to Ingham, operators have been able to add back lost production from last year without adding rigs in large chunks and drilling new wells.

The  drilled but uncompleted well inventory, aka DUCs, has dropped by nearly 35% over the last year in the Permian Basin and about 31% in the Eagle Ford Shale, according to Ingham.

The recovery across the state has been a cautious one, he said, “with the oft-discussed capital discipline on the part of operators and changing investor sentiment that focuses more on return on investment as opposed to rapid expansion of reserves with a potential future payoff.”

Still, the nature of production increases to date is temporary. E&Ps eventually may turn to boost activity to meet the demand implied by rising prices. That in turn should result in increased labor demand.

“Texas oil and gas producers understand the message behind higher prices for crude oil and natural gas, and that is to provide additional product to the marketplace if possible,” Ingham said. “Texas and U.S. independent oil and gas producers have proven time and time again that it is possible.

“If prices continue to climb and operators do not respond by drilling more wells and pushing the rig count upward, it would be the first time ever that that would be the case.”