The Texas Petro Index (TPI), an indicator of upstream oil and gas activity in Texas, increased modestly but steadily during the first half of the year, beginning July a scant 1.2% from matching the peak index achieved nearly five years ago, according to data released Monday. As has been the case for a while, oil production is the big story, but casinghead gas is lending support to natural gas output. 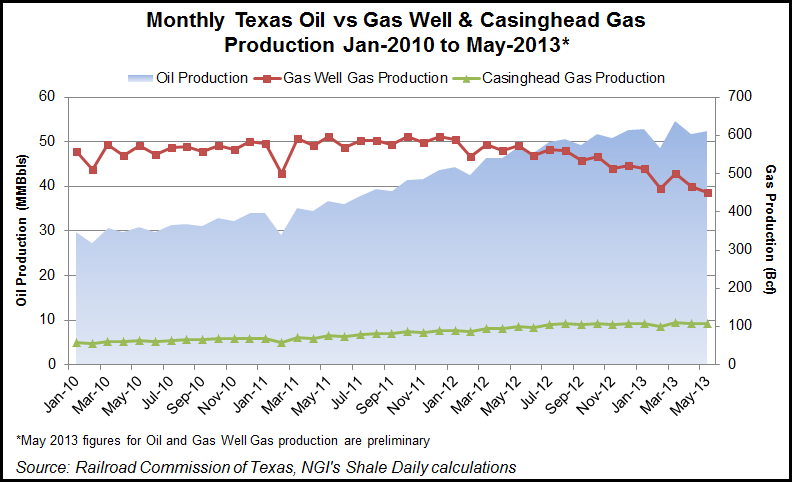 “Midway through 2013, the Texas oil and gas exploration and production economy is enjoying stability at a high level of activity, modest increases in aggregate activity levels, and impressive employment growth,” said Karr Ingham, the economist who created the TPI and maintains it monthly. “The industry continues to provide fuel to statewide economic growth, and at this point all signs are pointing to a continuation of those trends through the balance of 2013.”

Ingham said estimates of the volumes of crude oil and natural gas produced in Texas continue to be revised sharply upward, although the latter still shows a net decline since mid-2012. “Compared to the first six months of 2012, estimated crude oil production in Texas is up by about 15% midway through 2013, which in turn was up by about 35% compared to the same period in 2011,” he said. “Gas production estimates have been revised upward sharply, as well, which is surprising considering persistent low wellhead prices and the dramatic decline in the number of wells drilled specifically for gas.”

The economist said a deeper look at the data revealed upward revisions of Texas natural gas production are being driven by increasing volumes of associated gas produced as a byproduct of oil wells, so-called “casinghead gas.” Midway through 2013, the estimated volume of gas produced by wells drilled to produce gas trailed June 2012 output by about 11%; meanwhile, casinghead gas production skyrocketed, increasing by nearly 20%.

“Overall, statewide gas production has declined by 7% or 8% through the first six months of the year, but clearly the decline would be much greater absent gas produced from wells drilled primarily for crude oil,” Ingham said.

Although the count of active drilling rigs in Texas ended first half 2013 with about 90 fewer rigs working than at the end of June 2012 — and still lags the TPI peak of 946 active rigs in September 2008 by more than 100 units — Ingham said the Texas oil and gas exploration and production industry continues to add high-paying jobs.

“The oil and gas industry played a huge role in Texas’ standing in 2012 as the second-fastest growing economy in the country, achieving an annual growth rate of 4.8% based upon gross state product,” Ingham said. “Only North Dakota achieved a higher rate of growth, 13.4%, which was virtually driven entirely by oil and gas activity in the state [see Shale Daily, July 15].”

Despite North Dakota’s “spectacular” growth rate in 2012, Ingham said the Texas economy is much more diverse and is about 30 times the size of North Dakota’s.

A composite index based upon a group of upstream economic indicators, the Texas Petro Index in June 2013 increased to 284.2, up 3.4% from the same month in 2012. The TPI reached an all-time high of 287.6 in September and October 2008 and then declined to 188.5 in December 2009 before embarking upon the current growth cycle. The June TPI represents the peak in the current cycle.

Among TPI indicators during June:

The Texas Petro Index is a service of the Texas Alliance of Energy Producers.