The impacts of a historic cold snap on the Texas electricity market continued to reverberate on Monday, as one electric power supplier filed for bankruptcy and another was sued by the state attorney general in connection with the crisis. 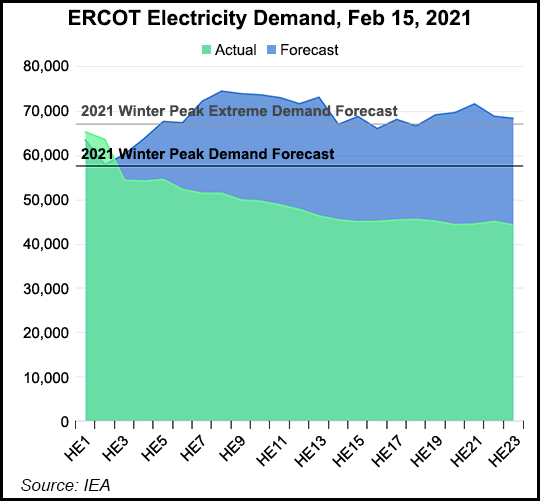 Brazos, a cooperative of 16 power distributors serving more than 1.5 million Texans, said it initiated the financial restructuring “to maintain the stability and integrity” of its system.

Before the Feb. 13-19 stretch of frigid temperatures, “Brazos Electric was in all respects a financially robust, stable company with a clear vision for its future and a strong ‘A’ to ‘A+’ credit rating,” management said. “As a result of the catastrophic failures due to the storm, Brazos Electric was presented with excessively high invoices by” the Electric Reliability Council of Texas (ERCOT) “for collateral and for purported cost of electric service, payment for which was  required within days.”

ERCOT is the independent system operator that manages power supply for more than 26 million customers in Texas.

“As a cooperative whose costs are passed through to its members, and which are ultimately borne by Texas retail consumers served by its Member cooperatives, Brazos Electric determined that it cannot and will not foist this catastrophic financial event on its members and those consumers.”

Brazos, the largest and oldest generation and transmission cooperative in Texas, said it will remain committed to helping its member cooperatives and their retail members during the restructuring, as well as supporting “the orderly, fair and expeditious treatment and satisfaction of its liabilities” resulting from the crisis.

“Let me emphasize that this action by Brazos Electric was necessary to protect its Member cooperatives and their more than 1.5 million retail members from unaffordable electric bills as we continue to provide electric service throughout the court-supervised process,” said general manager Clifton Karnei. “We will prioritize what matters most to our Member cooperatives and their retail members as we, and they, work to return to normalcy.”

Karney added, “We expect this court-supervised process will provide us with the protections and mechanism to protect and preserve our assets and operations, and satisfy obligations to our creditors.”

Although all generation technologies were impacted by the freeze, scarcity of natural gas because of wellhead freeze-offs and surging demand contributed to as much as 31 GW of gas-fired capacity being knocked offline, more than any other electricity source.

Paxton’s office said Monday that, “During the February freeze, Texas power companies failed to withstand the winter storm and left millions of Texans without power and heat during lethal, record-low temperatures across the state.

“Compounding this disaster, Griddy passed skyrocketing energy costs to customers with little to no warning, resulting in consumers paying hundreds or even thousands of dollars each day for electricity.”

Texas is one of 14 states that offer “retail choice” or “customer choice” for electricity users, allowing them to source electricity from a diverse array of retail electricity providers (REP) such as Griddy, as opposed to a single utility.

Griddy, in turn, allows its users to access wholesale electricity prices. However, this exposure to the spot market backfired on users when the Public Utility Commission of Texas (PUCT) directed ERCOT to implement market-wide scarcity pricing of $999/MWh to incentivize generators to turn on their facilities amid the frigid temperatures.

“Griddy misled Texans and signed them up for services which, in a time of crisis, resulted in individual Texans each losing thousands of dollars,” Paxton said. “As Texans struggled to survive this winter storm, Griddy made the suffering even worse as it debited outrageous amounts each day.

“As the first lawsuit filed by my office to confront the outrageous failure of power companies, I will hold Griddy accountable for their escalation of this winter storm disaster.”

Griddy, for its part, has said the scarcity pricing was left in effect longer than necessary, and indicated it is being scapegoated by PUCT and ERCOT.

In a statement last Friday (Feb. 26), Griddy said, “Today, ERCOT took our members and have effectively shut down Griddy…On the same day when ERCOT announced that it had a $2.1 billion shortfall, it decided to take this action against only one company that represents a tiny fraction of the market and that shortfall.”

Numerous market actors have been blamed for the crisis, which has resulted in the resignations of ERCOT Chair Sally Talberg along with several directors, including Karnei.

As of Monday, ERCOT’s website listed eight vacant positions on the board, including the chair and vice chair.

The Texas Tribune also reported Monday that PUCT Chair Deann Walker had tendered her resignation to Gov. Greg Abbott. In a letter circulated on social media, Walker said that the Texas grid failure “was not caused by any one individual or group,” but that, “I testified last Thursday in the Senate and House and accepted my role in the situation.”

PUCT has opened an investigation into the business practices of electricity retailers such as Griddy whose pricing is indexed to the wholesale rates.

Last week PUCT said, “While customers of municipally owned utilities, electric co-ops and REPss with fixed price or variable price contracts across the ERCOT region will be largely unaffected by the scarcity-driven increase in the wholesale market price for electricity, customers with plans indexed to the wholesale rate are reporting serious financial consequences.”

The Federal Energy Regulatory Commission also announced last week it is looking into possible market manipulation in the natural gas and power markets during the big freeze, which affected more than 4 million electricity customers in Texas.