Spectra Energy’s Texas Eastern Transmission LP is offering capacity on its Gulf Market Expansion Project, which would give Marcellus and Utica Shale gas access to growing Gulf Coast markets in Louisiana and Texas, including for future export of liquefied natural gas (LNG). 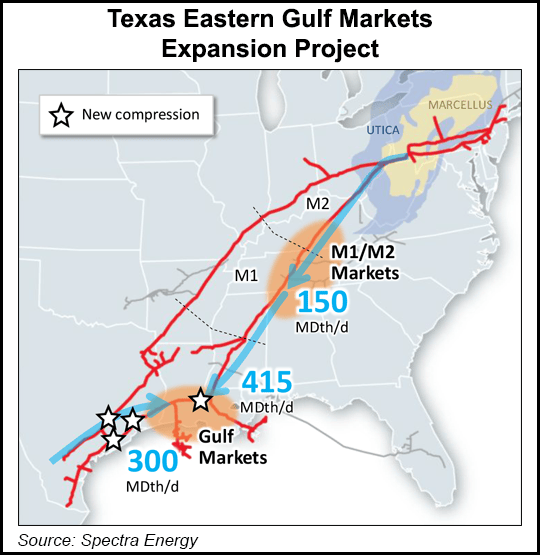 In a posting on its website, Spectra said industrial and power generation demand for gas is growing in the Gulf Coast region.

“In addition, the project offers mainline markets the opportunity to access the growing supply basins in the Northeast,” the pipeline said. “The transportation service offerings are designed to offer shippers the flexibility to customize their supply basin access to their preferences by selecting one or a combination of transportation(s).”

“Shippers may request other receipt or delivery points, which will be considered on a case-by-case basis, taking into consideration the facilities required to satisfy such requests,” Spectra said.

“This demand growth is going to be driven by multiple market segments, both domestic and abroad, including LNG [liquefied natural gas] exports, GTL or gas-to-liquids facilities, power generation, industrials and the petrochemical resurgence and exports to Mexico. We see this as a 10 Bcf/d demand potential, and it’s going to need supply from a variety of sources. The Gulf Coast and Midcontinent shales, yes, but most likely, the Appalachian shales as well [see Shale Daily, Jan. 17].”

Spectra said it has secured anchor customers for the Gulf Market Expansion. A binding open season for additional capacity is under way and runs through July 19.