The Texas Petro Index (TPI), a barometer that measures the health of the state’s oil and natural gas industry, in January surpassed its low point set during the industry’s previous cycle, and there is more pain ahead, according to the economist who compiles the index. But on the bright side, state crude oil production declined from year-ago levels. 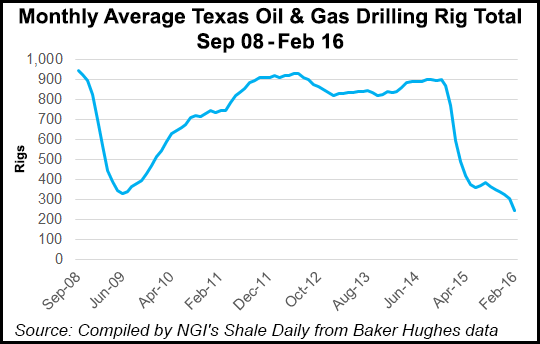 “It is at least somewhat encouraging that estimated crude oil production in Texas actually posted a year-over-year decline in January,” said economist Karr Ingham. “Although the decline was modest, we can expect the pace of production decline in Texas and the U.S. to accelerate in 2016.”

The TPI in January declined to 181.9, nearly 40% lower than its January 2015 level and the first time in its existence that the TPI fell below the lowest point of the previous industry economic cycle. Following a decline that began in September-October 2008, the TPI reached a nadir of 187.5 in December 2009 before embarking upon a five-year expansion that finally stalled at year-end 2014.

Absent meaningful market improvement, Ingham said activity indicators would continue to languish and that more job losses appear to be inevitable. According to the best-available statistical data, Ingham estimates the Texas oil and gas industry lost about 76,000 jobs through January from peak employment of 306,000 in December 2014.

“The last time the crude oil price and the rig count were at present levels, upstream oilfield employment in Texas was about 100,000 less than the January 2016 estimate of about 230,000,” Ingham said. “That suggests the bloodletting in Texas’ upstream oil and gas industry will continue as the year progresses.”