Commissioners in Brewster County, TX, said Tuesday they will petition FERC to assume jurisdiction over the planned Trans-Pecos Pipeline, which would pass through the county and move Eagle Ford Shale natural gas to Mexico. 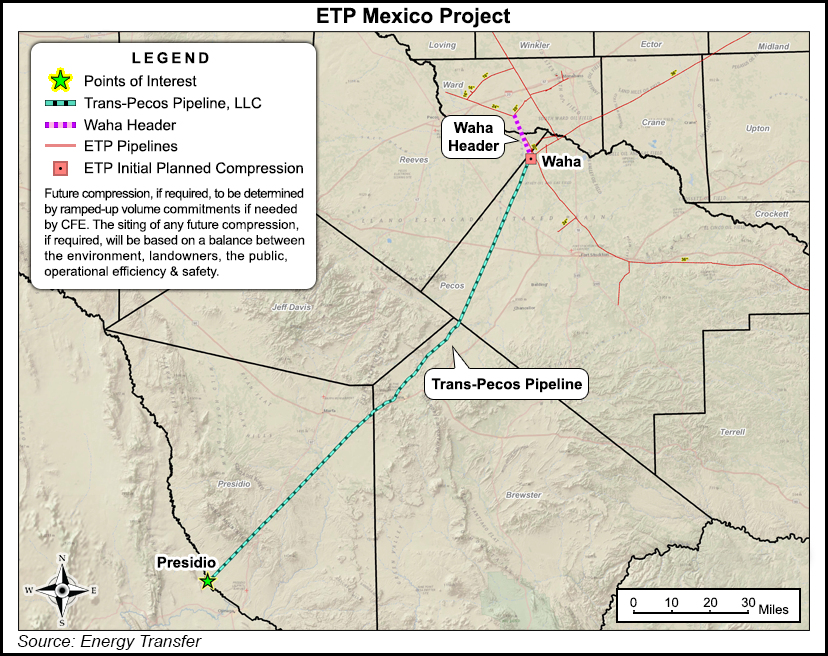 “…[T]he Railroad Commission of the State of Texas [RRC] denies responsibility for regulating the siting and construction of the proposed pipeline and has indicated no state agency has that authority…” the four commissioners said in their resolution to appeal to the Federal Energy Regulatory Commission. “…[T]he proposed pipeline passes through 33 miles of Brewster County and in close proximity to Alpine, TX…”

Trans-Pecos Pipeline LLC’s project would consist of 143 miles of 42-inch diameter pipeline and related facilities in Texas that would be regulated as an intrastate by the RRC. It would transport gas from the Waha Hub in Pecos County and traverse the Texas counties of Pecos and Presidio, besides Brewster, to an international border crossing. The border crossing facilities require a presidential permit to be issued by FERC (see Daily GPI, June 9). As an intrastate, the pipeline does not fall under federal jurisdiction, its developers claim. However, opponents argue that since gas moving on the pipeline would ultimately wind up in Mexico, it should be declared an interstate.

Trans-Pecos, which is being developed by Energy Transfer Partners LP and Mexico’s Carso, would have capacity of 1.3 Bcf/d. It anticipates installing interconnects with other intrastate pipelines and processing plants at or near Waha and in the surrounding area, and ultimately with interstate pipelines in the area. Potential interconnects would be in area towns and municipalities before terminating at the border. Some area residents are opposed to the pipeline for environmental and safety-related reasons, and they have vowed to fight its construction (see Daily GPI, May 21).

Brewster County Precinct 1 Commissioner Luc Novovitch of Alpine in comments filed last week at FERC [CP15-500] said, “…Brewster County does not have the emergency response infrastructure to answer this kind of incident [pipeline ruptures/explosions], which in our high desert region would most likely start a fire…

“The Trans-Pecos Pipeline would be…less than a mile from the city of Alpine, and less than a quarter-mile from the community of Sunny Glen. There are only two ambulances in northern Brewster County, which includes Alpine and Sunny Glen, and a small volunteer fire department. The cities of Marfa and Presidio would not fare any better in case of an incident of this type. The only regional medical center is in Alpine, and most of the medical emergency victims end up been flown to Odessa, Midland or Lubbock.”

Trans-Pecos submitted its FERC application for its planned border crossing in late May, and since then numerous comments have been filed in the docket.