The state of Texas is losing billions of dollar because of tax rate deductions for shale gas wells using hydraulic fracturing that are classified as “high cost wells,” according to a report by the state Legislative Budget Board (LBB). 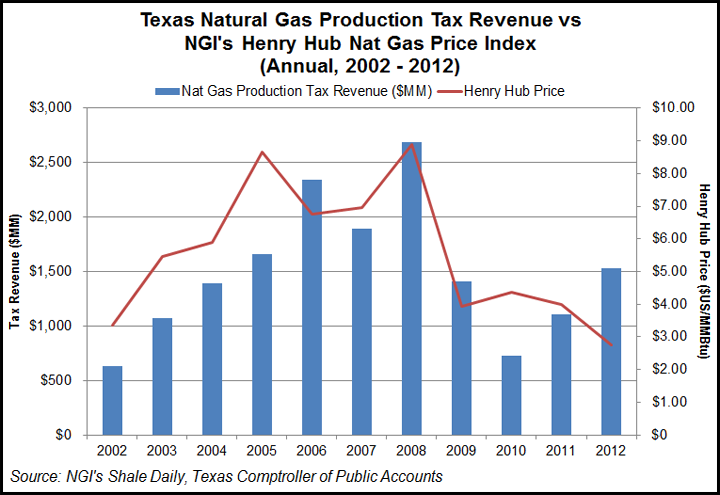 The board recommended modifying the tax code to restrict the deductions granted to unconventional gas drillers in its report to the state legislature on Texas state government effectiveness and efficiency.

“The future revenue generating capability of the natural gas production tax is in doubt,” the report said, stating that the deduction has cost the state $9.4 billion in revenue since fiscal year 2004. Wellhead prices below $3/Mcf have lowered the industry’s total tax burden, which is 7.5% of the market value of production within state borders. Various deductions, including the high-cost deduction, mean that many drillers have an effective tax rate of zero, according to the report. Still, the natural gas industry paid taxes worth $1.5 billion in fiscal year 2012, a 38% increase from the prior year (see Shale Daily, Sept. 18, 2012.

Under the current tax code the high cost gas tax rate deduction enables drillers to be classified as “high cost” based on the type of production and gas produced, not actual operating costs. “The effect is that all wells drilled within the Barnett Shale and Eagle Ford Shale qualify as high-cost wells regardless of the actual drilling costs,” said the report. Due to the advent of hydraulic fracturing (fracking) in those regions production classified as high-cost has surpassed that from non-high-cost wells every year beginning in fiscal year 2007. High-cost wells accounted for 55% of the state’s gas production in fiscal year 2011.

The state has seen its tax revenue from natural gas production grow from $628.5 million in 2002 to a high of $2.68 billion in 2008, when the Henry Hub price averaged $8.90, according to the Texas Comptroller of Public Accounts.

Among the specific recommendations are an adjustment to the calculation of the tax benefit that would result in smaller deductions for about 90% of high cost wells and the execution of a study “to determine at what natural gas prices, if any, the high-cost gas-rate reduction incentivizes production.” The report suggests the tax deduction doesn’t incentivize production at all, stating “it is likely that high natural gas prices would be sufficient to incentive production without the assistance of an additional tax benefit. It is also likely that at very low gas prices the rate of reduction would not be sufficient to incentivize added production.”

The study notes that natural gas production in Pennsylvania and West Virginia increased by a similar rate between 2004 and 2009 even though the latter state introduced a severance tax of 5% while the former did not. Other states are considering increasing taxes on shale production as well. Ohio Gov. John Kasich has proposed new severance taxes on gas and natural gas liquids (see Shale Daily, Dec. 24, 2012;Dec. 28, 2012).

While the the LBB recommends reducing the deduction, Texas State Rep. Lon Burnam (D-Forth Worth) has proposed a bill (HB 55) that would eliminate it. Burnam proposed a similar bill to repeal the tax exemption in 2011 (see Shale Daily, April 1, 2011). State Sen. Rodney Ellis (D-Houston) filed a bill (SB 71) to reduce the deduction.

“The LBB effectively endorses our view that the special rate for fracking is an outdated and unaffordable exemption. It doesn’t go as far as we would like, but it at least chips away at the problem,” Burnam’s chief of staff Conor Kenny told NGI. “Will the legislature have the courage to eliminate this giveaway?” he asked.