Rep. Henry Cuellar (D-TX) told lawmakers, professors and oil and gas executives that he wants to see U.S. companies ramp up their investment in Mexico’s Eagle Ford Shale and the Burgos Basin, warning that other nations — including China — could otherwise seize the opportunity. 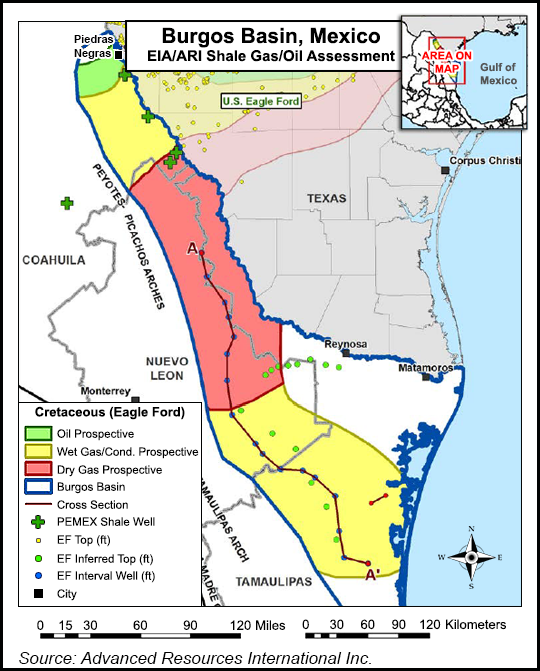 Cuellar told attendees of the Activo Integral Burgos conference — which was held on July 1 in Reynosa, in the state of Tamaulipas — that he also supports university student exchanges between the United States and Mexico, in order to help share shale development technology.

“With the excitement over shale technology, currently in the testing phase in Mexico, there is great excitement about the Burgos Basin and its potential to produce shale fuels,” Cuellar said, according to his prepared remarks. “The Burgos Basin’s production has been going steady for 70 years and the basin will continue to thrive, especially with the growth opportunity after [Mexico’s] energy reform.

“I am certain that after energy reform, investors from the U.S. side of the border will be excited to work with the Mexican private sector, and to build cooperative agreements to build capital on both sides of the border. Energy reform is a turning point for the expansion of the energy sector in Mexico, and these reforms will allow for the growth of infrastructure through revenues from the increased volume of production, and this infrastructure development will, in turn, spur greater investment from foreign investors seeking a stable place to finance new production.”

Cuellar said U.S. investors were “looking for a place where they can set up shop and feel secure,” and that Mexico could make that possible with reliable roads and infrastructure, security and a clear regulatory framework.

“We can count on our Mexican counterparts here to work with them to create that sense of stability,” Cuellar said. “In Texas, the government has successfully cooperated with the private sector to pursue opportunities in the Eagle Ford basin on the U.S side of the border. We have made strides toward energy stability through the shale oil boom, and through cooperation we can see this being replicated on the other side of the border.

“From our lessons on the U.S. side, we hope to share the knowledge of our experience, so that Pemex [Mexico’s state-owned oil and gas company, Petroleos Mexicanos] and other companies can thrive as they pursue shale exploration.”

Cuellar said he has introduced a bill, HR 2060, which calls for building opportunities for companies who operate in the Eagle Ford to help train Mexican workers, who would then return south of the border to build infrastructure in Mexico.

“American companies have the experience of working with the Eagle Ford basin from our side of the border, and can help flatten the learning curve for Pemex and other private sector companies operating in the region,” Cuellar said. “We have also been working to expedite an oil swaps agreement between the U.S. and Mexico, and I am personally speaking with Department of Commerce Under Secretary Eric Hirschhorn to move this along.

“This kind of oil swaps agreement just makes sense. It would be the first such arrangement in decades, and will allow for the more efficient processing of oil in both of our countries.”

In an interview with the San Antonio Business Journal, Cuellar said “we have to make sure that we don’t wake up one day and the Chinese are across the river when we had an opportunity to work with Mexico.

A spokesman for Cuellar, Rafael Benavides, told NGI’s Shale Daily on Tuesday that “aside from investing in the Burgos Basin and Eagle Ford Shale, the congressman is interested in having university student exchanges in Mexico and Texas for the exchange of technology to further develop these resources.”

Last year, Mexico’s Congress enacted legislation introduced by President Enrique Pena Nieto to reform the nation’s energy policies and break some of the monopolistic power of Pemex (see Daily GPI, Aug. 7, 2014; May 2, 2014). Among the reforms was a directive allowing outside investment in Mexico’s energy sector.