Like other areas of the country with plentiful supplies, Texas is cashing in on natural gas use in vehicles and the fueling infrastructure that goes with them. The Railroad Commission of Texas reported that to date there has been $174 million invested in natural gas vehicles (NGV) and fueling stations to support them in the state. 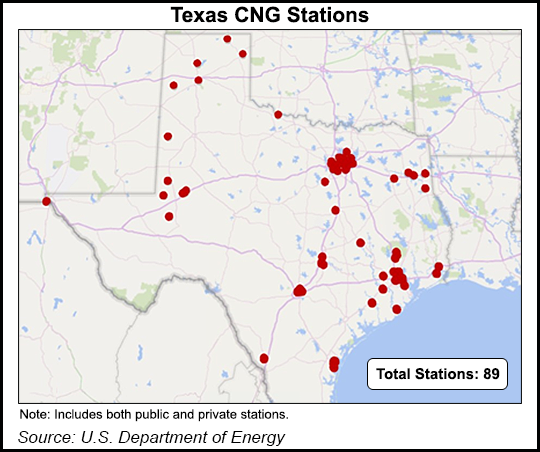 At the one-year mark in an NGV initiative for the state, Railroad Commissioner David Porter, who kicked off the effort last year, reported that the latest statistics point to “sustainable market growth and support” for the state legislature-backed transportation push for natural gas.

Porter said the state’s program so far has maintained a balanced approach between investment in vehicles and fueling infrastructure. It is funding both.

“The close balance — $95 million for NGVs and $79 million for fueling stations — shows that the state’s vigorous market growth is sustainable because we are addressing both sides of the old ‘chicken-egg’ problem,” Porter said.

Porter is coordinating a first-ever Texas Natural Gas Summit Oct. 23 in Austin, highlighting more than 60 industry employers and 30 advanced NGVs, along with workshops led by fleet vehicle and oil/gas operators. The state commission promotes NGVs through its Alternative Fuels Research and Education Division.

A different kind of first emerged in September in California with a South San Francisco firm installing a new fueling station to support its growing fleet of compressed natural gas (CNG) refuse trucks with fuel derived from food waste products. It is the first-ever transportation fuel derived from dry anaerobic digestion in the nation.

A compost-based facility will be the first in the United States to employ dry anaerobic digestion technology to make transportation fuel, said officials with South San Francisco Scavenger (SSF Scavenger). Its fueling station is being built by Newport Beach-based Clean Energy Fuels Corp., including an anaerobic digester by a Lafayette, CA-based supplier, Zero Waste Energy (ZEW).

ZEW used equipment from BioCNG to process the biogas from the digester into pipeline-grade biomethane that is compressed into CNG. The fully enclose digester system processes 11,200 tons of material annually, including food scraps and food-spoiled paper collected from businesses, yielding 500 diesel gallon equivalents of CNG daily.

SSF Scavenger has 17 CNG-fueled refuse trucks from Autocar and America LaFrace among a fleet of 50 route trucks and 20 support vehicles. In addition to South San Francisco, the company services the other peninsula suburbs in Brisbane, Milbrae, Colma and the San Francisco International Airport.

Another waste hauler, Toronto-based Progressive Waste Solutions, a multi-national fleet operator, said it is heading toward a fleet of 550 CNG-powered trucks. It now has close to 400, and it is planning to add another 150. The trucks are spread throughout Canada and parts of the United States.

Since May 2013, Progressive executives said the company has added 250 CNG trucks to its waste/recycling collection fleet. Roughly 10% of its fleet is powered by natural gas with the current 400 CNG vehicles in operation.

With a fleet numbering in the thousands of vehicles, Progressive purchases from 300 to 400 trucks annually for normal replacement and “is on track to have up to 55% of the total number of vehicles it replaces annually in Canada and the United States fueled by CNG,” a company spokesperson said last Tuesday.

By 2019, the company expects to have 18-20% of its vehicles powered by natural gas, and there will be more than 550 CNG vehicles on its routes by the end of next year.”

Saratoga Springs, NY-based American Natural Gas (ANG) and Buffalo-based Cobey Energy have a new agreement under which ANG will offer Cobey equipment as part of its CNG fueling stations, with exclusivity in New York state. The deal will help streamline ANG’s construction of NGV fueling stations, according to CEO Drew West.

In Cavriago, Italy, CNG and liquid petroleum gas (LPG) conversion specialist Landi Renzo USA announced it has opened a new research and development center adjacent to its headquarters. Landi Renzo is marking a 60th anniversary at its headquarters near Bologna. It provides alternative CNG and LPG fueling systems for vehicles in 50 different countries.