The U.S. drilling permit count reversed by 23% in May month/month and was down 3% from a year ago, Evercore ISI said in its latest summary of nationwide data. 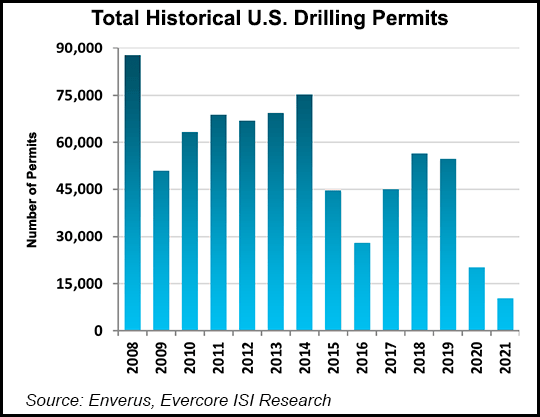 April permitting had bounced up by double digits from March, but permitting fell into the “pre-summer blues” last month, according to the analyst team led by James West.

“Every single basin” saw permits decline in May from April with the exception of the Mississippian Lime, up 18% (21 permits), and Woodford formation, which jumped 36% (nine permits).

New Mexico showed a 13% increase in permitting activity for May, while Oklahoma permitting rose by 36%.

During April, Permian permit activity by the energy majors, which include BP plc, Chevron Corp. and ExxonMobil, comprised 6% of the total count in the basin. However, in May their collective total “was a meager 1% of the total permits,” West said. Meanwhile, Pioneer Natural Resources Co. led the independents with the most Permian permits approved in May at 33, but its permit requests were down by about half from April. With two big mergers in a matter of months, Pioneer in May became one of the largest producers in the Permian, with output expected to average to 700,000 boe/d-plus in 2022.