Texas rigs have been coming back and so have the oil and natural gas jobs, according to data from Baker Hughes Inc. (BHI) and the Texas Workforce Commission (TWC). 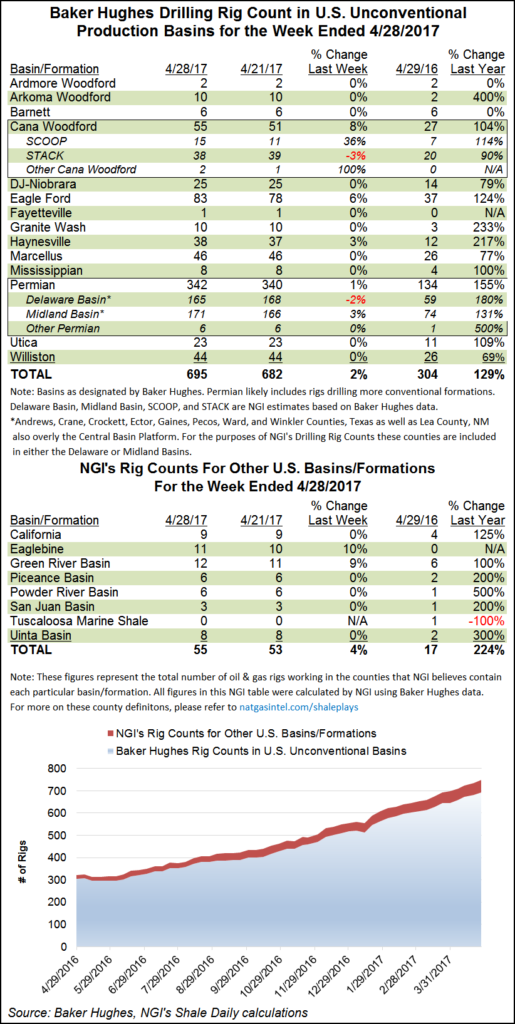 During the week ended April 28 the Lone Star State rig count added 11 units to end at 437 active rigs, making Texas by far the biggest gainer among states for the week, according to BHI data.

The Eagle Ford led Texas plays, adding five rigs, while the Permian gained two, which was modest by Permian standards.

“Texas has gained 10,300 upstream oil and natural gas jobs over the past six months,” TXOGA said in a good news press release.

As of March, employment in the Texas upstream sector was down 97,700 jobs from peak employment in December 2014. “The Texas oil and natural gas industry, while slowly recovering, is not out of the woods yet,” said TXOGA President Todd Staples.

The upstream sector includes oil and natural gas extraction and supporting activities and does not include other sectors in the oil and natural gas industry such as refining, petrochemicals, fuels wholesaling, oilfield equipment manufacturing, pipelines and gas utilities.

Nationwide, the U.S. land rig count gained 15 units to end at 849. One rig came back to the inland waters, and three left the offshore, making for a net U.S. gain of 13 to end the week at 870 active rigs.

Nine oil rigs and four natural gas rigs came back. Twelve horizontals returned along with three directionals, crossing paths with two vertical rigs on their way out of the patch.

Meanwhile in the Haynesville Shale, one rig was added to the North Louisiana/East Texas play to bring its count to 38 units, up from 12 active rigs one year ago.

More gas is coming, Carlson said. “The rig count in the ArkLaTex has ripped higher in recent months and has now popped to over 60 rigs,” he wrote. “East Daley’s ArkLaTex basin-level gas production model shows steep growth under a flat 65-rig scenario. The natural lag between drilling and completion has kept volumes in a slight decline the past six months, but expect that to change soon…[T]here is more supply on its way.”