Natural gas futures raced higher Tuesday as traders assessed overnight news of a pipeline explosion and the resulting drop in production. The June Nymex gas futures contract breezed past the $2/MMBtu mark to settle 14.1 cents higher day/day at $2.134. July jumped 8.2 cents to $2.312, while smaller gains were seen through October with modest losses beyond that. 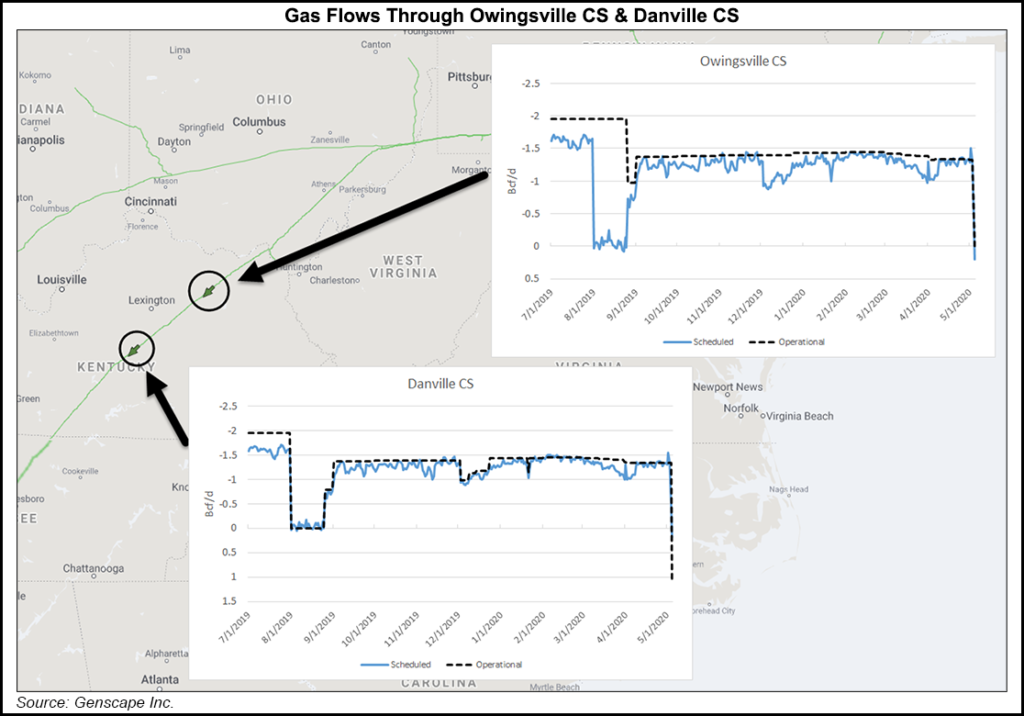 Spot gas prices rallied again Tuesday as yet another cool shot is forecast to sweep across the Lower 48. NGI’s Spot Gas National Avg. climbed 17.5 cents to $1.885.

With continued volatility from the coronavirus and projected supply cuts, the news late Monday of an explosion on Texas Eastern Transmission Co.’s (Tetco) 30-inch diameter system reverberated through the futures market. The blast, the second in less than a year, occurred upstream of last year’s incident, north of its Owingsville, KY, compressor on Line 10. Tetco declared a force majeure late Monday advising shippers of an “unplanned outage” and an indefinite restoration timeline.

As a result, north-to-south capacity through Owingsville was reduced to zero from 1.33 Bcf/d beginning Tuesday. Flows through the compressor were at or above capacity for the majority of the month prior to the explosion, according to Genscape Inc.

“The outage is expected to add bearish pressure on Tetco M2 prices as one of its main export lines is severely constrained, which will force reroutes in the region and possibly cause shut-ins,” Genscape analyst Josh Garcia said.

The 30-inch system was still undergoing remediation from the Danville explosion when the latest incident occurred. In last week’s operation status update, Tetco had revised the timetable for remediation further into the third quarter.

Genscape noted that Owingsville’s capacity prior to the Danville incident was 1.96 Bcf/d, 630 MMcf/d higher than the recent operating capacity. However, in the previous explosion, flows never reached zero, averaging 40 MMcf/d north to south during the initial repairs/assessments, which lasted 25 days.

“Elsewhere on Tetco, the force majeure on Line 10 between Berne, OH, and Holbrook, PA, was lifted, but whatever flows were restored to Berne were quickly drowned out by the event at Owingsville,” Garcia said.

Also aiding Tuesday’s double-digit rally in the futures market was another decline in production. Bespoke Weather Services said top-day estimates showed Lower 48 production off more than 10 Bcf from late-November highs, at slightly under 86 Bcf. The firm viewed the decline in production as “more rapid than anticipated” and “a big deal” if there is a continued drop-off moving forward, especially for winter.

EBW Analytics Group, like many others, warned of trouble ahead for U.S. LNG. The firm said the United States delivered about 24% of all supply into Europe in April, relinquishing its title as top regional supplier to Qatari LNG, which accounted for more than 30% of all physical gas sold into Europe for the month. Russian pipeline gas and LNG accounted for slightly under 20%.

Meanwhile, weather took a backseat Tuesday as models stayed the course in showing “quite a bit of strong cold” relative to the time of year for the next week to 10 days, boosting late-season demand especially in the Midwest to East, according to Bespoke. However, models are starting to gravitate toward the firm’s view that the East and South warm later this month while the West gets cooler.

“For now, this warming means little in terms of demand, but in our view is a sign of what we feel is to come with the summer pattern, where we do expect a hotter summer in the eastern half of the nation as we move toward a La Niña base state,” Bespoke said.

In the meantime, the market is expecting a string of huge storage injections in May, the first of which is expected on Thursday. Early estimates are for the Energy Information Administration (EIA) to report a build near or above the century mark, though the range of early projections is wide. This would compare with the 96 Bcf injection the EIA recorded in the similar week last year and the five-year average of 74 Bcf.

As of April 24, inventories stood at 2,210 Bcf, about 55% above year-ago levels and about 20% above the five-year average, according to EIA.

Energy Aspects said its weekly balances are indicating a string of triple-digit injections will take place through May, with the inaugural 100-plus Bcf build coming Thursday. The firm’s flow data indicated that production will have dropped by more than 1 Bcf/d week/week, but this would not be enough to offset a 6 Bcf/d or so drop in residential/commercial demand, with an additional 0.7 Bcf/d week/week loss in LNG feed gas.

“Although that signals bearish fundamentals, it is clear that the market has been trying to price in two opposing dynamics: expected deep sequential declines in associated production versus demand bearing the marks of disruptions from Covid-19, whether that be in the domestic market or exports,” Energy Aspects said.

There are some early signs that associated production already is slowing down, according to Energy Aspects. The firm has seen decreases in the Bakken Shale, the Rockies and the Gulf of Mexico.

At the same time, Energy Aspects expects some incremental improvements in industrial demand but said LNG cancellations would occur over the coming month. Meanwhile, Mexican flows are still depressed even as NET Mexico pipeline maintenance has come to an end.

“Readings continue to be near 5.0 Bcf/d, a level near where we anticipate pipeline trade will average for May,” Energy Aspects said.

The Mexican government declared a national state of emergency on March 30 and has since called for a mandatory shutdown in all nonessential business activity until May 30 by threatening to sanction those companies that do not comply.

“It will be these additional hits, or suppression, to demand that will be measured against sequential declines in output, driven by associated output,” Energy Aspects said.

Temperatures were expected to plunge into the 20s to 40s overnight, with the coolest weather across the Great Lakes and interior Northeast, according to NatGasWeather. While the blast of chilly air is expected to reach the southern United States as well, the outcome would keep temperatures in the “ideal” 70s and 80s from Texas to the Southeast over the next several days, the forecaster said.

The Southwest is to remain hot, according to NatGasWeather, with highs projected to reach the 90s in eastern California. The rest of the West into the Plains is forecast to be rather comfortable with highs of 60s to 80s.

SoCal Citygate next-day gas jumped 22.0 cents to $2.210, but farther north, PG&E Citygate rocketed 44.5 cents higher to average $2.940 as maintenance on the pipeline is set to begin Wednesday that would cut imports by more than 250 MMcf/d for more than three weeks.

Meanwhile, as expected, Texas Eastern M-2, 30 Receipt prices took a hit following the Tetco explosion, slipping 2.5 cents day/day to average $1.500. This compares with other small decreases in the region, as well as some modest gains. However, Columbia Gas shot up 17.0 cents to $1.785, which was more in line with markets downstream in the Northeast.

Gains of 15-20 cents were common throughout the Southeast and in the middle of the country. Henry Hub spot gas climbed 16.0 cents to $1.930.

Gulf South Pipeline started scheduled maintenance Tuesday at its Tallulah compressor station, restricting operational capacity by as much as 200 MMcf/d through May 14. Throughout the event, the Expansion Receipts Upstream Tallulah Scheduling Group capacity could be impacted by the complete reduction in operating capacity due to limited operational flexibility, according to Genscape Inc.

“As a result, eastward exports out of Louisiana may be slightly depressed throughout the duration of this maintenance event,” analyst Preston Fussee-Durham said.

Despite the slightly cooler weather in Texas, prices across the state were higher. Agua Dulce in the southern part of the state jumped 29.5 cents day/day to average $1.900, while Waha in West Texas climbed 17.5 cents to $1.745.