More than a month after a massive explosion in Southwest Pennsylvania knocked out service on a portion of Texas Eastern’s (Tetco) Penn-Jersey Line in the M3 Zone, three pipelines still remain shut-in, limiting flows east of the Delmont Compressor station. 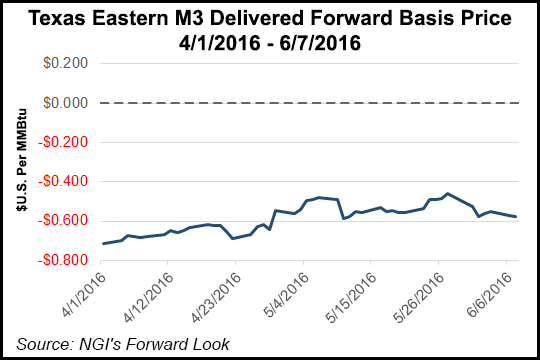 The blast occurred off State Route (SR) 819 in Westmoreland County’s Salem Township, about 30 miles east of Pittsburgh, on a section of the system where four pipelines run parallel to one another (seeShale Daily, April 29).

The incident took out about 1 Bcf/d and cut flows to zero for 10 days after the incident in late April (see Shale Daily, May 2). The Pipeline and Hazardous Materials Safety Administration (PHMSA) authorized Spectra Energy Corp. to restart the 30-inch diameter Line 19 in early May, which restored nearly 1.2 Bcf/d of capacity through Delmont following an integrity test that confirmed no damage was caused during the explosion and fire (see Shale Daily, May 10).

In the days before the incident, flows through Delmont averaged 1.07 Bcf/d, including a peak of 1.36 Bcf/d on April 27. The Delmont compressor station was designed with a peak capacity of 2.6 Bcf/d.

M3 deliveries basis has increased since the outage. Prior to the blast in April trading, prompt Tetco M3 delivered basis averaged minus 65 cents, compared to an average of minus 53 cents during May trading, according to NGI data.

It remains unclear, however, when the other three pipelines in the zone may be able to restart. The 30-inch diameter Line 27 ruptured, and it’s also unclear when repairs could be completed.

Spectra spokesperson Creighton Welch said the other two lines, 28 and 12, were not impacted by the incident.

“We continue to assess the other lines to confirm their integrity and are taking a conservative approach to ensure we can safely return those to service,” Welch said. The company is working with PHMSA on a “return to service timeline for when we have completed these assessments.”

The blast toppled trees, razed one house, damaged others and sent one resident to the hospital with severe burns. The incident forced state officials to close a portion of SR 819, which reopened late last month. Spectra also recently said air quality samples and tests of soil, groundwater and surface water showed no contamination from the incident.

In a notice on Tuesday for gas day June 8, Tetco said a force majeure remained in effect because of the outage at Delmont. The cause of the blast remains unknown, but PHMSA said in a corrective action order issued last month that a preliminary investigation had revealed evidence of corrosion along two of the affected pipe’s circumferential welds, including at the point of failure and on another excavated piece (see Shale Daily, May 4). Those segments have been sent to a metallurgist for examination and failure analysis.