Among the supporters of the Dakota Access Pipeline (DAPL) completion are Tesoro Corp. and master limited partnership Tesoro Logistics LP (TLLP), which have a vested interest in an extension of their Bakken Shale operations, the CEO said Tuesday. 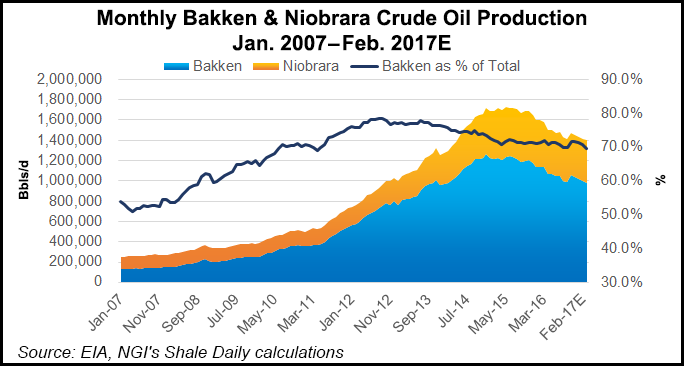 “We completed several interconnections on the [TLLP] High Plains oil pipeline system in North Dakota, including the one at Johnson’s Corner, and these interconnections enhance options for producers moving crude to various exit points,” Goff said.

Tesoro also started two interconnections to DAPL and in early January completed the $700 million acquisition of oil, produced water and gas gathering systems and two gas processing facilities in the Bakken core with ties to 10 different producers in North Dakota.

“The new North Dakota assets should add $80-90 million of net annual earnings in 2017,” he said, and they offer organic growth prospects for TLLP.

The company’s newly acquired assets are positioned for the Bakken play overall, Goff said, including the Robinson Lake Processing facility, along with “very high-quality producers” that may use TLLP facilities.

Tesoro also has completed a gas gathering and processing system in the Uinta Basin in Colorado to capture more volumes on the TLLP system beginning this year, Goff said.

TLLP wants to leverage relationships it developed in its Rockies operations with producers from there that are also active in the Bakken. “There are full-service capabilities now we can offer in the Bakken, so we like that opportunity very much,” he said.

The new Bakken assets “are off to a good start,” with four rigs working in the footprint, ahead of what TLLP had estimated for the year. “And we have good discussions ongoing with customers there.”