No injuries or interruptions of service resulted from a rupture of Tennessee Gas Pipeline in rural Clark County, KY shortly after noon July 22, a spokesman said.

It took a while before flames erupted at the rupture site, he said, and the fire burned some trees and caused damage to a car and a house under construction in the area. One home and one trailer were evacuated until that evening, and one resident was hospitalized overnight for observation, he said.

The blast occurred on the 24-inch diameter 100 Line, which was taken out of service between Main Line Valves 105 and 106. Six lines go into Station 106 near Winchester, KY, and five proceed downstream from there, the spokesman said. Gas flowing through the damaged line was rerouted to the others. The pipeline’s automatic closure equipment shut in one valve, and workers manually shut in the valve at the other end of the affected segment, he said.

Tennessee personnel were investigating the site last week but as of Friday had not determined any cause of the rupture or when the segment could be returned to service. 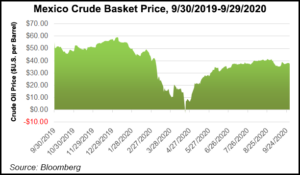 Additional credit rating downgrades of Mexican national oil company Petróleos Mexicanos (Pemex) and of the sovereign are among the biggest internal risks facing the country’s economy as it struggles to emerge from a still-raging coronavirus pandemic and economic downturn, according to local authorities. In its latest summary of risks facing the economy issued Tuesday, Mexico’s…