Looking to expand its physical footprint in the northeastern United States and capitalize on growing natural gas supplies out of the Marcellus and Utica shales, Tenaska Marketing Ventures (TMV) said Thursday that it has opened a new regional office in Boston — the company’s sixth in North America. 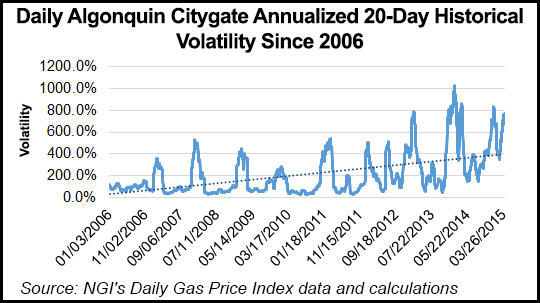 TMV President Fred Hunzeker said the new Boston marketing office is intended to more fully serve new and existing customers and grow the company’s physical presence in the Northeast. The Boston staff will work in conjunction with the trading and scheduling teams located at TMV headquarters in Omaha, NE.

“Since its inception, Tenaska Marketing Ventures has extended its expertise across North America to efficiently meet the changing needs of our customers,” said Hunzeker. “We see tremendous opportunities for customers as the Northeast energy market continues to evolve.”

Hunzeker pointed to the changes in the natural gas industry resulting from the development of the Marcellus and Utica shale plays, increased demand driven in part by coal plant retirements and a desire for cleaner sources of power generation, and pipeline expansions to handle locational shifts in supply and demand.

“The natural gas industry is experiencing unprecedented growth, and TMV prides itself on being a trusted advisor as customers navigate these changes across the supply chain,” Hunzeker said. “We have assembled a highly skilled Northeast presence, joining TMV’s more than 140 experienced professionals.”

The office will be led by Senior Director of Origination Tom Lockett, who has held marketing leadership positions with BP Energy and GDF Suez. His experience includes natural gas and liquefied natural gas (LNG) project origination and sales, particularly focused on the northeastern United States.

“Given the significant changes in the Northeast resulting from pipeline development, LNG imports and power generation, TMV — with its deep customer focus and nimble approach to market challenges and optimization — is extremely well positioned to be an integral player in the Northeast,” Lockett said.

In addition to the Boston office, TMV has existing offices in Omaha, Dallas, Denver, Calgary and Vancouver. In 2014, the company sold or managed 2.5 Tcf of natural gas, equal to 9.4% of total U.S. natural gas consumption.

Natural gas trading volatility at the Algonquin Citygate, which serves Boston, has trended higher in recent years, despite the presence of the burgeoning Marcellus and Utica shales just a few states away. Since 2006, annualized 20-day historical volatility at the Algonquin Citygate has averaged a whopping 174.7% and stood at 735.8% on April 1, according to Daily GPI calculations.

“To put that in comparison, consider that the average comparable volatility figure for the NASDAQ Composite, which is one of the most volatile equity indexes among developed nations, averaged just under 20% for that same time period,” said Patrick Rau, NGI director of strategy and research.