Tellurian Inc. has completed another acquisition in the Haynesville Shale, further bolstering the natural gas production position as works toward sanctioning a Louisiana LNG export terminal.

A unit of Houston-based Tellurian disclosed it paid $125.5 million for a package of assets from EnSight IV Energy Partners LLC and EnSight Haynesville Partners LLC. At the close of the acquisition, Tellurian said average production capacity was 150 MMcf/d in the Haynesville. That rate could rise to around 250 MMcf/d as 11 wells are turned to sales by the end of the year. 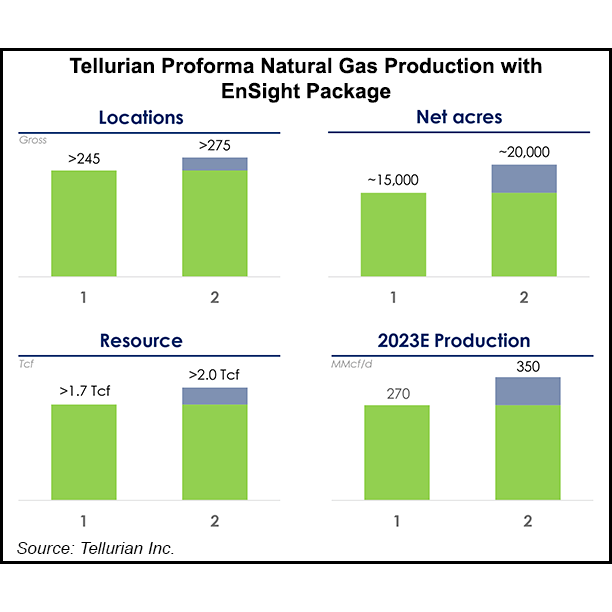 Tellurian is working to progress the Driftwood liquefied natural gas export project near Lake Charles, and CEO Octávio Simões said the EnSight deal was part of the strategy to build a value-intensive business.

“By owning and operating upstream assets, a pipeline network and the Driftwood LNG terminal, Tellurian will have the ability to sell natural gas into domestic or international markets,” Simões said. “This combination of assets represents a compelling value for our shareholders.”

[Extreme Weather & Its Impact: In this episode of the Hub & Flow podcast, we explore how utilities are trying to balance the urgent need for new energy infrastructure to meet increasing demands and the long-term necessity of heavily weatherized natural gas and power grids that can adapt to the changing climate. Listen now.]

The nearly 5,000 net acres are in Louisiana’s Bossier, Caddo, DeSoto and Webster parishes. There were 44 producing wells and five wells in progress when the transaction was completed.

During a second quarter conference call earlier in the month, Simões said the Houston-based company’s gas production was primarily aimed at creating an “economic hedge for natural gas purchases.”

Tellurian initiated early construction at Driftwood in March. The Federal Energy Regulatory Commission issued a draft environmental impact statement in May for the proposed pipeline project that would feed Driftwood. First liquefaction is still eyed for 2026.

In its 2Q2022 earnings, production and revenue grew to record levels. Net production was 9 Bcf from 2.1 Bcf year/year. Natural gas sales revenue was $61.3 million in 2Q2022, compared with $5.6 million in the year-prior period.