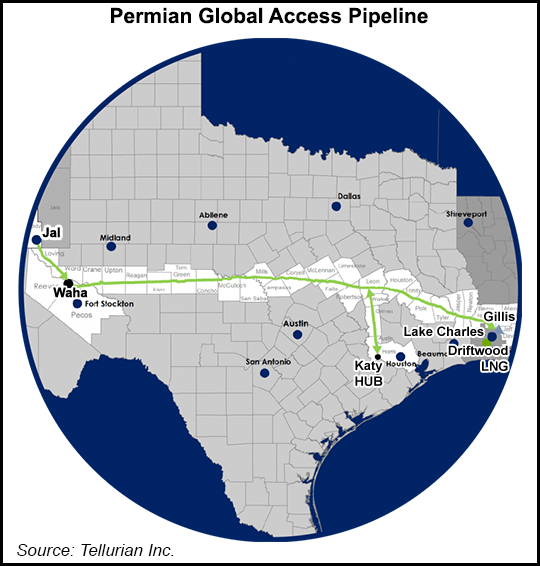 In the filing with the Federal Energy Regulatory Commission, PGAP formalized plans to seek a certificate to build the pipeline, which would carry up to 2.3 Bcf/d from the Waha hub in West Texas to the Lake Charles area of Southwest Louisiana. Earlier this year, Tellurian launched open seasons for PGAP and two proposed Louisiana-to-Gulf Coast pipelines.

PGAP is one project in a network of pipelines that Houston-based Tellurian has proposed as part of its plans to develop the 27.6 million metric tons/year Driftwood LNG export terminal on the west bank of the Calcasieu River.

The PGAP project would include up to 355,000 hp of compression over six stations, likely sited in the West Texas counties of Reeves, Reagan, Concho, Coryell, Leon and Polk. PGAP also plans to build 22 meter stations along the pipeline.

Beyond generating economic growth, PGAP could provide environmental benefits by creating an outlet for Permian associated gas that might otherwise be vented or flared, the company told FERC. The project would also “facilitate alternative energy development by providing a more reliable and sustainable, economic, cleaner burning and more efficient fuel for power and energy that will complement alternative energy development and deployment.”

Tellurian is one of several second-wave U.S. LNG developers looking to hit the water in the next half decade, when the recently slack global LNG market is expected to tighten.

During a corporate presentation earlier this month, Tellurian management touted the potential economics of Permian-sourced gas as a proof of concept for the company’s strategy. If all of Tellurian’s assets were in place today, Permian gas priced at 50 cents/MMBtu and shipped on PGAP for 35 cents/MMBtu would allow the Driftwood terminal to put LNG “on the water” for $2.35/MMBtu, management said.

PGAP is targeting an in-service date in the second half of 2023 or the early part of 2024, roughly aligning with Tellurian’s plans to bring Driftwood online in 2023. Tellurian has said it expects to finalize precedent agreements for PGAP during the next three months.

During a rollout of its 2Q2019 results, Tellurian was less specific on the timeline for the proposed Louisiana gas pipelines, the Haynesville Global Access Pipeline and the Delhi Connector Pipeline. Management alluded to “over-subscribed indications of interest” from the recent open seasons but did not specify whether it anticipated securing binding precedent agreements for the two systems.