Tellurian Inc. said in a regulatory filing on Wednesday that it was evaluating options to cut the costs of the first phase of its proposed 27.6 million metric tons/year (mmty) Driftwood liquefied natural gas (LNG) terminal in Louisiana. 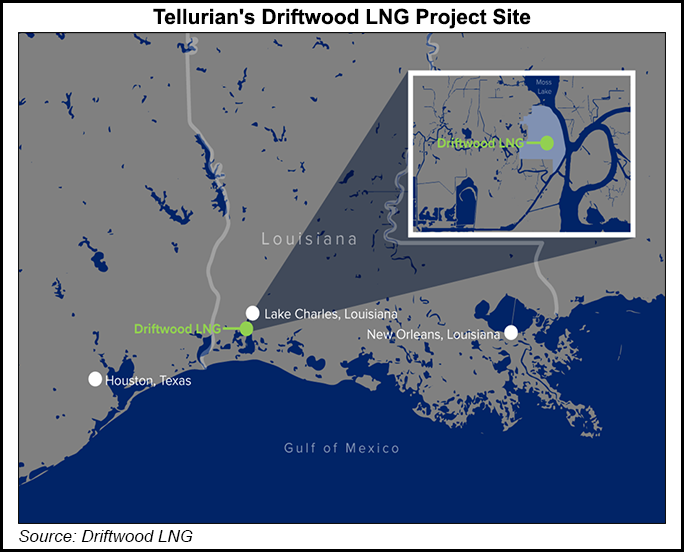 It was the latest announcement from the company as it works to get the project off the ground in a market reshaped by the Covid-19 pandemic. Tellurian also said in an 8-K filed with the U.S. Securities and Exchange Commission that it’s likely to take a “substantial impairment” for the second quarter on its upstream assets in the Haynesville Shale, joining scores of other companies that have written down the value of their properties as commodity prices have declined.

“Whether the company implements changes to the project will be based on a variety of factors, including the results of the company’s continuing analysis, changing business conditions and investor feedback,” Tellurian said in the filing, noting that 30% of the engineering for the first phase has been completed.

The company delayed a final investment decision (FID) on Driftwood last month and said it ultimately could drop plans to build a $4 billion pipeline to supply the facility. The pandemic has squeezed the global gas trade and prompted cost-cutting. Demand has plummeted in a market that was already awash in cheap gas, making it difficult for new projects to secure agreements with customers unwilling to commit to long-term deals and forcing delays across the world.

Talks for Petronet LNG Ltd. to purchase 5 mmty and take a $2.5 million equity stake in Driftwood broke down in May when a key memorandum of understanding with India’s largest LNG importer lapsed. But Reuters reported Tuesday that talks have been revived, citing anonymous sources who said Petronet and Tellurian have until the end of December to conclude a deal.

The Petronet deal is seen as one of the last pieces needed to reach an FID on Driftwood as it would leave Tellurian with only 4 mmty of capacity to sell and a path toward moving ahead with the first phase of the project. Tellurian has proposed a unique business model to compete against the dozens of other proposed U.S. LNG projects. It requires long-term customers to buy $500 million of equity for each 1 mmty of guaranteed offtake, and plans to control costs by owning gas production and pipeline transportation.

Other hurdles remain too. Tellurian could sustain another significant setback if its projected timeline is not met, as Total SE has the right to terminate deals for up to 2.5 mmty of offtake and investments of up to $700 million if an FID on phase one is not made by July 10, 2021.

Tellurian’s shares gained heavily on Tuesday after news of the renewed talks with Petronet. The company announced on Wednesday that it has sold 35 million shares to institutional investors at $1.00 each for net proceeds of $32.5 million.