Liquefied natural gas (LNG) developer Tellurian Inc. has delayed a final investment decision (FID) on its proposed Driftwood LNG export terminal by one year to 2021 and may drop plans to build a $4.2 billion pipeline to bring Permian Basin supply to the first phase of the project, the company’s chief said Tuesday. 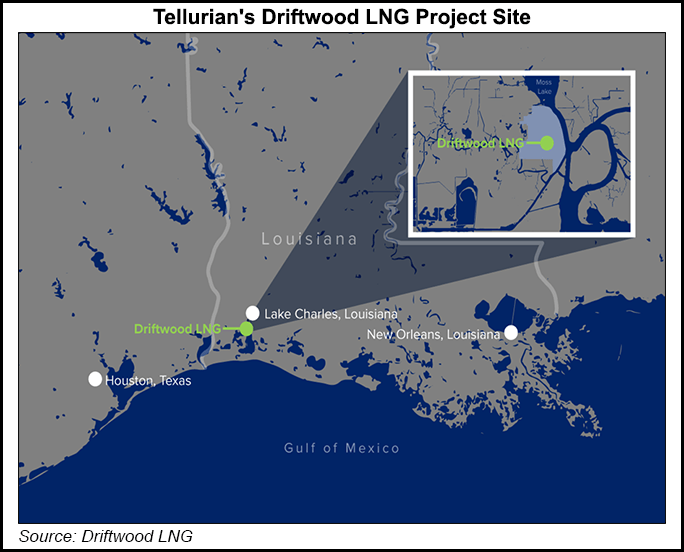 The move to drop plans for the Permian Global Access Pipeline is among a number of cost-cutting measures that Tellurian has been evaluating amid the Covid-19 pandemic, CEO Meg Gentle said during a presentation at the JP Morgan Energy Conference, which was held online. Tellurian also recently laid off 40% of its workforce.

Despite Petronet’s decision and continuing uncertain market conditions caused by the pandemic, Tellurian management believes that Asian spot LNG prices will rebound from current levels of about $2/MMBtu to more than $5 by next June. That would allow Tellurian to sanction the first phase of the project next year for the 13.6 mmty and begin construction, Gentle said.

First gas would likely be produced in 2024 and full production would be reached by 2027, Gentle said. Tellurian could be expanded to 27 mmty with 20 trains, each with a capacity of 1.38 mmty.

“We will continue to have softness in the LNG market for June, July and August, as we finish out the summer,” Gentle said. She expects demand to return “in the back half of the year…as economies are recovering and then we go into the heating season with actually a lot of tightness in the market.”

Tellurian could sustain another significant setback if its projected timeline is not met, as Total SA has the right to terminate deals for up to 2.5 mmty of offtake and investments of up to $700 million if an FID on phase 1 is not made by July 10, 2021, according to a document Tellurian filed with the U.S. Securities and Exchange Commission. With Total’s deals, its investment in Tellurian would reach $907 million for a stake of about 20%.

“We continue to enjoy what’s already a partnership together with Total,” said Gentle.

Tellurian has proposed a unique business model to compete against the dozens of other proposed U.S. LNG projects. It’s requiring long-term customers to buy $500 million of equity for each 1 mmty of guaranteed offtake and plans to control costs by owning gas production and pipeline transportation.

With the expectation that booming oil production in the Permian would lead to producing large volumes of cheap associated gas, Tellurian in 2017 proposed a 625-mile, 2 Bcf/d Permian pipeline from the Waha gas hub in West Texas to Gillis, LA.

With Permian associated gas production having dropped about 10% amid the pandemic as oil drilling has declined, Tellurian plans to focus on bringing dry gas from the Haynesville to Driftwood, Gentle said.

“We’ve taken the time over these last several months of the quarantine to look at everything in our overall capital cost and will have some opportunities to bring the capital budget down,” Gentle said. “The first big place is that reduced drilling in the Permian Basin probably means that we don’t need to include the pipeline that we had anticipated bringing Permian gas all the way to the Driftwood terminal…We’re not going to need that as part of our phase 1.”

Tellurian owns 10,300 acres in the Haynesville with total reserves of about 1.3 Tcf and management is confident it can produce gas at less than $1.80, as Tellurian and other companies are producing Haynesville gas today at those prices, Gentle said. Tellurian’s current Haynesville output is 3.3 MMcf/d.

Tellurian’s Haynesville holdings represent about 10% of the assets it would need to operate Driftwood. It plans to acquire additional acreage in the region as it starts construction, the CEO said.

That would be significantly cheaper than the FOB costs that most U.S. projects are offering that comprise a take-or-pay liquefaction fee in the range of $2-2.50, plus a feed gas cost of about 115% of the Henry Hub price. Tellurian customers would need to pay the up-front cost of $500 million for each 1 mmty of offtake, which would translate to about 32 cents/MMBtu if the plant operates for 30 years, excluding financing costs, according to NGI calculations.

Tellurian plans to own 49% of the equity and offtake at Driftwood, which would allow it to market supplies on its own.

Despite the current weak global LNG market that has led to the turndown of significant U.S. production, Tellurian management expects that 2020 trade still will be 5% higher than 2019, depending on how quickly economies recover in the second half of this year.

Global trade totaled about 36 mmt in December and dropped to about 31 mmt in May, but that was still 0.1% higher than May 2019, according to Gentle’s presentation.

By this December, global liquefaction capacity will grow to 37.3 mmt per month, 2.5% higher than last December, which would not keep up with demand growth, she said. “That will provide some upward price pressure and, frankly, some tightness in the market.”

Expectations that oil prices will be in the range of $40/bbl in the latter half of the year also would support LNG prices, she said. Most Asian long-term LNG supply contracts are linked to oil prices.

The global LNG market next year will enter “a five-year period of supply starvation,” Gentle said, with capacity growing by a combined 53 mmty, or an average of 2.3%/year, with some of those additions likely to sustain delays, she said. That compares with a combined capacity addition of 146 mmty from 2016-2020, with an average growth rate of 8.3%/year.

If global demand grows at a more conservative rate of 5-6%/year, Tellurian projects a need for 100 mmty of additional capacity in 2025, she said, “which puts Driftwood right in the perfect window to bring new supply online by the end of 2024 and then ramp up right in the time period when new capacity is desperately needed.”

The Covid-19 pandemic could eventually benefit the LNG market by increasing demand to replace coal- and oil-fired generation with gas-fired generation, “because one of the outcomes of the coronavirus obviously is the focus on respiratory health and the need for clean air,” Gentle said.

Low prices have helped grow the southeast Asian LNG market as countries in those regions have bought cheap spot supplies. That region of the world is building, or will imminently start building, 150 mmty of new LNG import capacity, she said. “I think I’m coming out of coronavirus more bullish on natural gas demand than I was before.”