Tellurian Inc. said Monday it would soon start work on its Driftwood liquefied natural gas (LNG) terminal on the Louisiana coast by self-funding basic construction ahead of a final investment decision (FID). 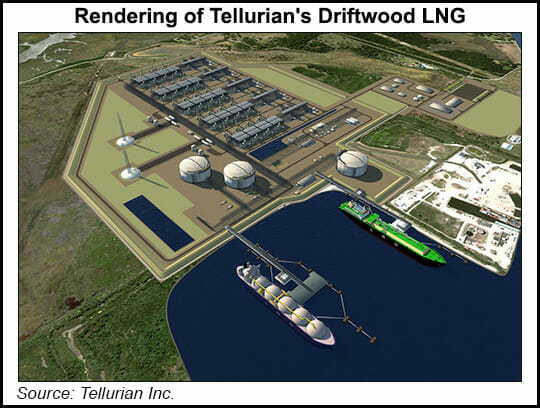 The project has not been sanctioned. Anticipation of a possible FID has been brewing since it was approved in 2019 by the Federal Energy Regulatory Commission. The project was originally proposed to begin liquefaction this year when initial applications were filed in 2017.

CEO Octávio Simões said the decision to begin work now was influenced by the energy supply crisis in Europe, which has worsened since Russia’s invasion of Ukraine more than a month ago.

“Energy security is a leading concern in many countries today and the United States must do our part to supply LNG to the global market as quickly as possible,” Simões said. “Beginning construction now allows Tellurian to deliver upon our robust schedule for first LNG in 2026 while we complete the project financing.”

The company reported detailed engineering for Driftwood is 30% completed. The plans for the facility call for constructing five liquefaction trains, three LNG storage tanks, a marine terminal and about 96 miles of pipeline.

Bechtel, which in 2018 made a $50 million investment in Tellurian, won engineering, procurement and construction agreements in 2017 for Driftwood’s four phases. The first phase calls for two plants, with each plant containing four liquefaction trains.

Tellurian to date has secured long-term sale and purchase agreements (SPA) for 9 mmty. It inked three 10-year deals last year for 3 mmty of capacity each with Shell plc, Vitol Inc. and Gunvor Group Ltd. The contracts are linked to the Japan-Korea Marker and Dutch Title Transfer Facility benchmarks on a free-on-board basis.