Renewed buying interest after the previous week’s slide in natural gas prices, as well as supportive news on the weather front, sent natural gas forward prices up across the curve. 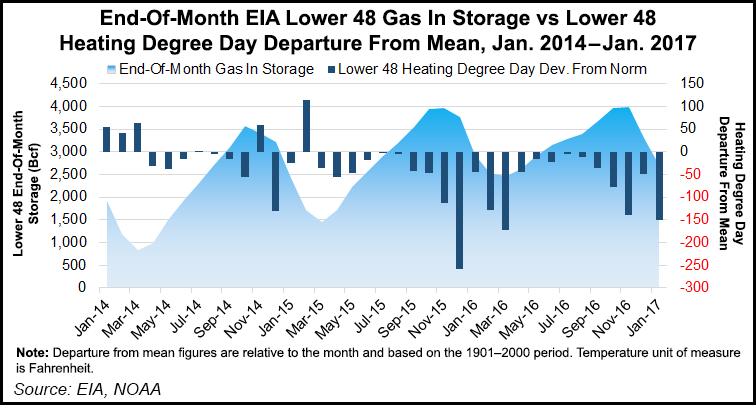 March forward prices were up an average 7 cents from Feb. 3 to 9, and stronger gains were seen further out the curve amid ongoing soft production and the potential for an improving storage situation thanks to forecasts for prolonged cold in portions of the country, according to NGI’s Forward Look.

The Nymex futures curve set the stage for this week’s rebound, which largely occurred in Tuesday trading as technical support factored into an otherwise bearish market. The Nymex March futures contract gained 8 cents for the Feb. 3-9 week, while April climbed 10 cents and the summer 2017 and winter 2017-2018 strips each gained 12 cents.

In fact, aside from the technical support the market received after such sharp selling during the previous week, the overall theme of mild temperatures so far this winter is expected to hold for the remainder of the month. While there will be several weather systems that will bring cold shots into the northeastern United States — including the one for the week ending Feb. 10 and another expected the following week — milder-than-normal conditions covering much of the rest of the U.S., highlighted by Texas highs in the 70s and 80s, are effectively offsetting any damage done by these Northeast cool shots, forecasters with NatGasWeather said.

In fact, data and analytics company Genscape Inc. projected Midwest demand to top out Thursday Feb. 9 at 14.49 Bcf/d, then drop 2.4 Bcf/d for Friday and another 1 Bcf/d into the weekend. New England demand was also expected to top out Thursday just above 4 Bcf/d, fall to 3.84 Bcf/d Friday and run around 3.3 Bcf/d the following week. Appalachia demand was projected to peak Friday at 17.8 Bcf/d, fall for the weekend and then run around 15.5 Bcf/d the following week.

A milder break is still favored over the east-central U.S. Feb. 19-22before additional weather systems follow to close out the month, which NatGasWeather views as having potential to trend colder in time, but it would need quite a bit more data to come on board for the markets to expect it. The weather forecaster noted the Global Forecasting System weather model that had been consistently a bit colder than the rest of the data after Feb. 23, finally trended milder in Friday morning runs.

Meanwhile, Thursday’s storage report from the U.S. Energy Information Administration (EIA) was essentially viewed by the market as a snoozer. The EIA reported a storage withdrawal of 152 Bcf for the week ending Feb. 3, in line with market estimates, although 5 Bcf of that draw was a reclassification from working gas to base gas in the Pacific region. At 2,559 Bcf, working gas in storage is 325 Bcf less than last year at this time and 45 Bcf above the five-year average of 2,514 Bcf.

“This draw is somewhat looser week on week, but again very tight versus previous years. Before assessing any potential loosening, I think it’s important to consider next week’s storage number for confirmation,” NatGasWeather said.

Indeed, as of Thursday, 15-day weather forecasts called for an accumulation of 336 heating degree days (HDD), or approximately 80 fewer than normal. The near-term bearish weather is likely behind Friday’s dramatic slide that wiped out the week’s momentum. The Nymex March futures contract finished Friday’s regular trading session at $3.034, down 10.7 cents from Thursday’s close.

“EIA estimates for the next two weeks are quite bearish, as stockpiles are expected to grow when compared to the five-year average decently, and that could be playing a role in the selling today. Additionally, cash prices have consistently been weaker than prompt month prices as well, though we do note that they recovered a bit yesterday,” forecasters with Bespoke Weather Services said.

Still, it may have been that the natural gas market was pricing in a bit of long-range bullish weather risk that now looks a bit less likely to materialize, the Harrison, New York-based company said.

“Prices again tested $3 early this morning before bouncing marginally, which makes this level important if the bulls have any chance of gaining momentum back that’s been quickly lost since early Thursday,” NatGasWeather said.

Beyond February, however, the market could be in for some support as indications are pointing to cold weather holding onto the northern tier of the U.S. well into spring. Northeast population centers can expect rain and snow through mid-March, and that will keep a lid on temperatures, according to Paul Pastelok, AccuWeather lead long-range forecaster. “As far as a significant warmup goes in the Northeast, I think you have to hold off until late April and May,” Pastelok said.

And chilly air will also stretch westward into the Midwest. “It seems like all the cold and all the snow has been really piling up across that area, and it’s going to be no different going into the early spring,” he said.

The National Oceanic and Atmospheric Administration’s (NOAA) Climate Prediction Center said Thursday that a La Nina event in the Pacific Ocean has faded, and the northern hemisphere is likely to see neutral conditions, or even an El Nino event, in coming months. That could result in the slow retreat of a northern jet stream, which brings cold air to the upper levels of the atmosphere over North America, according to AccuWeather’s Pastelok.

“If it’s slow to move out, which is typical of a weak La Nina season, you’re going to get more explosive systems, more severe weather, and that’s a good possibility in the southern Plains this year,” Pastelok said.

And as NGI’s Patrick Rau, director of strategy and research, said during the first week of February, winter-time pricing will always have something of an option value priced in. “The premium is a call option that winter weather will be severe. This winter hasn’t been all that bad, and there’s only a few weeks left to it, so no real premium value there. Next winter, however, is obviously very much in play, and unknown,” he said.

From a pure financial theory, the longer the time before an option expires, the more it’s worth, everything else being equal, Rau added. So the fact that there is still a full winter of 2017-2018 to go means that the severe-weather option premium should be higher versus the one for the few weeks we have left in winter 2016-2017.

Not all areas saw declines in production last month. Gas production continues to grow in the prolific Northeast, with production up 0.2 Bcf/d in January versus December 2016 levels, which were 22.5 Bcf/d. In fact, Northeast production has grown on average the past four months and now stands at an all-time high, besting February 2016 levels of 22.4 Bcf/d, IHS Markit said.

And while the overall gas market recovery pegged by many in the market is poised for a slow one, the EIA said this it expects dry natural gas production to average 73.7 Bcf/d in 2017, a 1.3 Bcf/d increase from the 2016 level, which was down for the first time since 2005. Production in 2018 is expected to increase by an average of 4.1 Bcf/d from the 2017 level, EIA said.

Looking closer at individual markets, New England prices saw some extreme volatility at the front of the curve for the Feb. 3 through Feb. 9 week as the March package took its cue from the cash market. Algonquin Gas Transmission Citygates March forward prices started off the week by plunging 24 cents, only to recover half of that the next day. Prices again fell by the double digits midweek before essentially stalling Thursday.