Columbia Gas Transmission LLC (TCO) said about 1.3 Bcf/d of firm service could be disrupted indefinitely after an explosion and fire occurred Thursday on the Leach XPress line in Marshall County, WV, prompting the company to issue a force majeure. 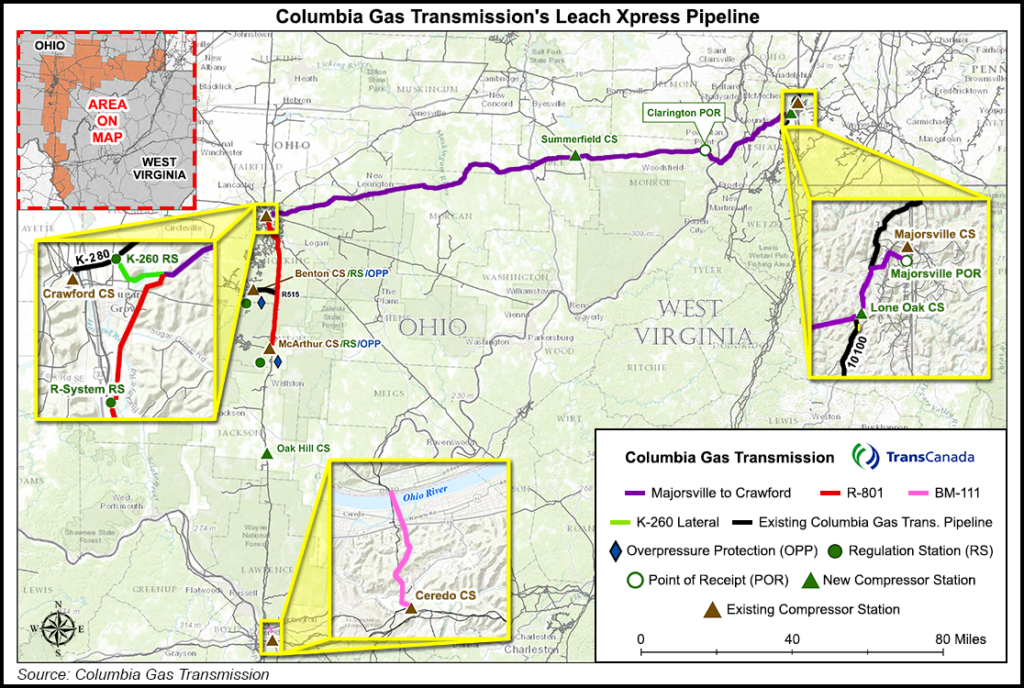 TCO said that until further notice, capacity on the segment would be cut to zero, which could stir up prices in the region. Residents in a rural part of the county reported hearing a loud explosion early Thursday, according to local news media reports. Area first responders said the fire that followed was quickly extinguished after TCO shut off gas flow. No injuries or property damage was reported.

A spokesperson for TransCanada Corp., which owns the TCO system, said the incident occurred at 4:15 a.m. ET. The cause of the blast remains unclear and the impacted area has been isolated, the company said.

Leach XPress came online in January to expand TCO and move 1.5 Bcf/d of Appalachian natural gas primarily to the Southeast and Gulf Coast via an interconnect with the broader system and TransCanada’s Rayne XPress project, which entered service last year. It’s been heavily utilized, according to Genscape Inc.

The firm said in a note to clients on Thursday that the Leach XPress segment has been flowing at or just above its operational capacity through May. Of the 1.5 Bcf, Genscape said, 38% is new production, 11% is re-routed TCO gas and 46% is rerouted from other pipelines. As of Noon ET on Thursday, Genscape said there were no major changes to nominations.

The incident comes less than a year after a maintenance worker was killed at a TCO meter station in Northeast Ohio, when natural gas blew through a leak there.