TC Energy Corp. is projecting U.S. natural gas demand to swell by over 27% by 2030 to about 115 Bcf/d versus 91 Bcf/d in 2021, with growth forecasted from LNG exports, power generation, industrial demand and pipeline exports to Mexico. 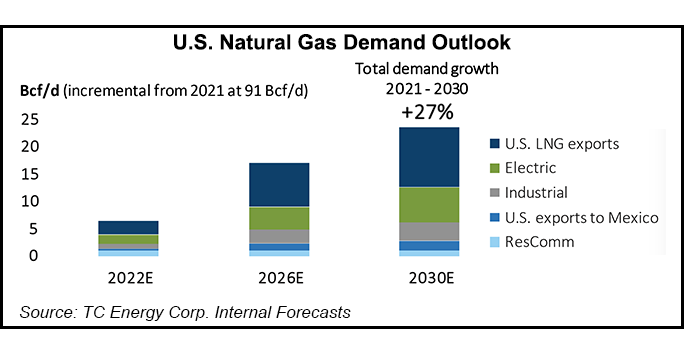 Although the expected growth is disproportionately led by liquefied natural gas exports, “nearly all sectors are expected to see some increase in throughput throughout the end of the decade,” TC’s Stanley Chapman III, vice president in charge of U.S. and Mexico natural gas pipelines, said during TC’s investor day in Toronto.

“On the supply side, there are plenty of resources in the ground to support growth,” Chapman said, including in the Permian Basin and Haynesville Shale, “and most importantly the Appalachian Basin.”

He explained that while the Permian and Haynesville “are primed to feed rapid growth in the LNG and Gulf Coast markets, they’re also subject to nearer-term production declines – and this underscores the importance of the Appalachian Basin, whose production is greater than the Haynesville and Permian combined, in sustaining long-term demand and underpinning energy security, reliability and affordability.”

High natural gas prices in Europe and Asia, combined with abundant U.S. gas reserves, have positioned U.S. LNG export demand to grow by an estimated 70%, from 12-13 Bcf/d currently to 21 Bcf/d or more by 2030, Chapman said.

“As evidenced by our recently announced Gillis Access project and our irreplaceable pipeline footprint, I expect us to continue to compete for and win our fair share of midstream expansion opportunities, and continue to increase our share of LNG feed gas deliveries,” he said.

TC sanctioned Gillis Access, a $400 million, 1.5 Bcf/d header system in Louisiana, during the third quarter. The idea is to connect Haynesville supply with rapidly growing LNG demand on the Gulf Coast.

Gillis Access is one of several natural gas takeaway projects under development in the Haynesville, where production is up by about 1 Bcf/d so far this year.

“There were some rumblings out there about short-term pipeline takeaway constraints, particularly moving gas from the north to the southern part of Louisiana,” NGI’s Patrick Rau, director of strategy and research, said on a recent episode of NGI’s Hub and Flow podcast. “But unlike most other major gas areas in the United States…infrastructure is much less of an obstacle in Louisiana.”

Citing Wood Mackenzie projections, Rau said Hayneseville gas production is expected to reach 21 Bcf/d by 2030, up from about 11 Bcf/d in 2021, with the growth driven largely by Gulf Coast export demand.

TC, for its part, currently delivers around 3 Bcf/d or 30% of LNG feedgas in the United States.

By 2025, TC is on track to see that volume more than double, Chapman said.

While many assume that these volumes will be sourced from the Haynesville and Permian, “don’t discount the potential for Permian gas in particular to flow south to meet growing Mexico demand, thereby providing a greater potential to further expand our Columbia systems which directly connect Appalachian supply to Gulf Coast markets,” Chapman said.

Chapman said he expects TC to sanction about $1 billion of new growth projects annually through the end of the decade. In addition to serving LNG demand, these projects are likely to include laterals to gas-fired power plants as more coal capacity is retired, projects to shore up supply to utilities, and low-carbon opportunities such as renewable natural gas and hydrogen blending.