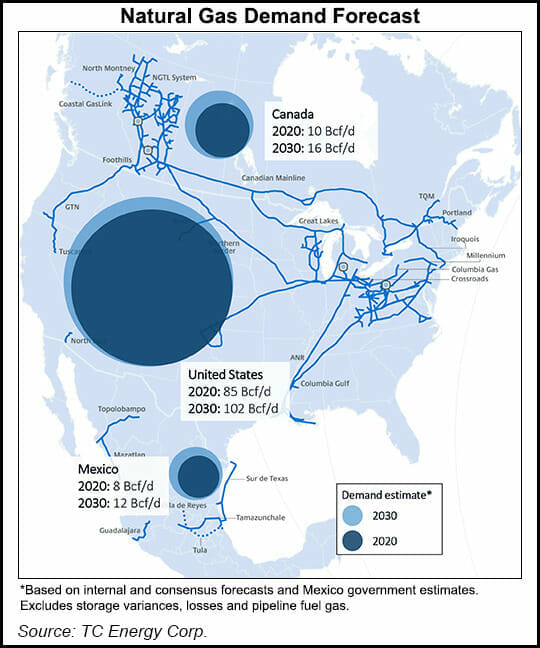 Gas supply from the Western Canadian Sedimentary Basin (WCSB) and the Appalachian Basin, two of the main sources of gas flowing on TC pipes, is set to grow by a combined 13 Bcf/d by the end of the decade, Robinson said. She cited the competitiveness of the basins’ gas supply, with high natural gas liquids content in the WCSB and high well productivity in the Appalachia.

The executive also highlighted that North American LNG has some of the lowest emissions intensity in the world.

TC is aiming to ensure the WCSB “has the right amount of competitively priced capacity” to supply gas to the rest of the continent.

Compared with 2020, natural gas flows to date on TC’s Canadian Mainline are up 24% this year, with Nova Gas Transmission Line up 13%, Robinson said.

For 2021, TC expects to bring more than $1.3 billion worth of pipeline projects into service in Canada, part of a larger expansion underway since 2017. By the time the expansions are completed in 2024, “we’ll have positioned our assets effectively” in the WCSB’s Montney Shale, “and added 3.5 Bcf/d of delivery capacity to multiple markets,” Robinson said.

In addition, the 2.1 Bcf/d Coastal Gaslink (CGL) pipeline, which would supply gas to the LNG Canada export project in British Columbia, is more than 50% complete, Robinson said.

TC management said in its 3Q2021 report to shareholders it expects CGL “project costs to increase significantly along with a delay to project completion compared to the original project cost and schedule.”

This is because of the “scope changes, previous permit delays…and the impacts from Covid-19, including a British Columbia provincial health order,” the company said.

In the United States, meanwhile, natural gas demand is set to grow by 22% between 2020 and 2030, said TC’s Stanley Chapman III, president of U.S. and Mexico natural gas pipelines. LNG exports are expected to drive the growth, augmented by pipeline flows to Mexico.

TC’s pipelines deliver about 27% of natural gas consumed in the United States, Chapman said, noting that throughput across the U.S. pipelines is up 5% year-to-date.

“Similarly, Lower 48 production will grow commensurately,” Chapman said, with the Permian and Appalachian basins, as well as the Haynesville Shale leading the way.

TC placed $900 million worth of U.S. projects in service during 2021, with another $7 billion of growth, modernization and maintenance projects equating to 10-15 Bcf/d slated to enter service between 2022 and 2025. Another $500 million of projects are awaiting final investment decision.

Chapman said “contrary to what you may hear about our business, both the near and longer-term fundamentals are relatively healthy. In the short-term, as the pandemic winds down, worldwide economic growth has created strong demand for goods, services and energy at a pace that has exceeded that of supply.”

Chapman said “given the breadth of our extensive pipeline network, in any given year I believe we should be originating about $1 billion of new growth projects.”

In the United States, TC has growth projects “in some form of origination on virtually all of our 13 pipes, all of which are primarily in-corridor, permittable, constructable, compression-related expansions,” he said.

TC is expected to win large projects related to coal-fired power plant retirements, which “may include opportunities for us to continue to electrify our compression fleet.” Chapman said. “For example, there are 16 coal plants within 15 miles of our Columbia and ANR pipelines that currently generate about 16 GW of capacity and have announced retirements by 2025.”

While a large portion of new capacity would be replaced by renewables, “there still will be a residual need for 1-2 Bcf/d of incremental pipeline capacity for reliability purposes…directly adjacent to our footprint.” Chapman said.

On the energy transition front, TC would need to electrify one to two U.S. compression stations per year for the rest of the decade, requiring potential capital investments of $1-2 billion over that timeframe, he said.

“In 2022, I’d like to see us lay the foundation for, if not implement, a pilot program around hydrogen blending.” TC “will invest in these technologies when they can be deployed safely and generate a return that successfully competes for the capital against the other growth opportunities that we have.”