After surviving protests and the Covid-19 pandemic, Coastal GasLink (CGL) plans to start  laying pipe for the only liquefied natural gas (LNG) export project underway on the northern Pacific coast of British Columbia (BC). 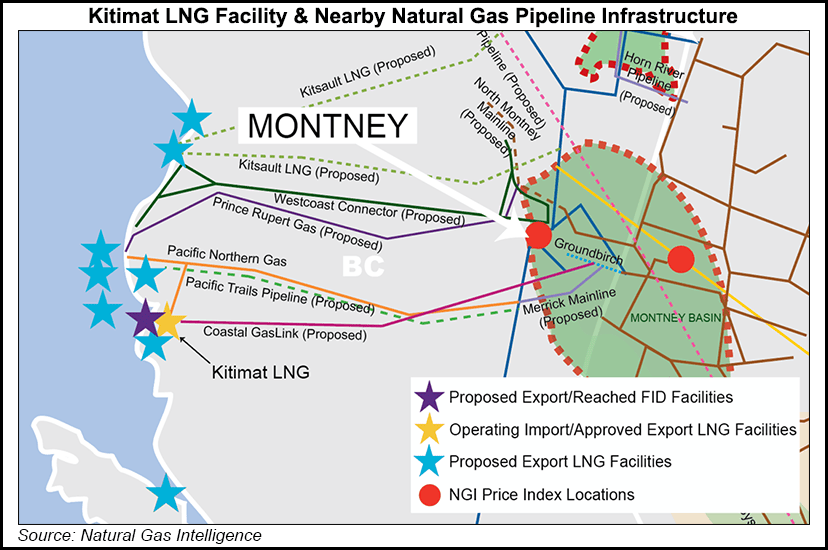 CGL said construction employment would roughly triple to peak at more than 2,500 in September as work accelerates along the 416-mile route from northern BC gas fields to LNG Canada, which is being built at Kitimat.

With a second wave of Covid-19 seen as a potential threat in BC, CGL and its contractors are “implementing enhanced project-wide health and safety standards at all worksites and workforce accommodations.” Precautions include fielding about 80 medics from International SOS, a global health and safety contractor.

The onset of the pandemic coincided with a seasonal industrial activity lull in northern BC, where spring thaw renders the region’s rugged forests, mountains and muskeg swamps impassable to construction equipment and crews.

During the lull, skeleton crews built work camps and cleared the pipeline right-of-way to enable the summer acceleration of construction.

The winter and spring preparations were completed despite protests that escalated into a 17-day railway blockade by those opposed to cooperation agreements signed by CGL and native communities along the pipeline route.

The announcement that construction would accelerate on schedule to hit the pipeline’s 2023 completion target date stood out as the second success for the C$6.6 billion ($4.9 billion) project so far this spring.

In late May, sponsor TC Energy Corp. closed a sale of a 65% investor ownership share in CGL to a partnership of KKR & Co. and Alberta Investment Management Corp., while also raising project construction financing from a bank syndicate. An additional 10% ownership stake is on offer to native groups.