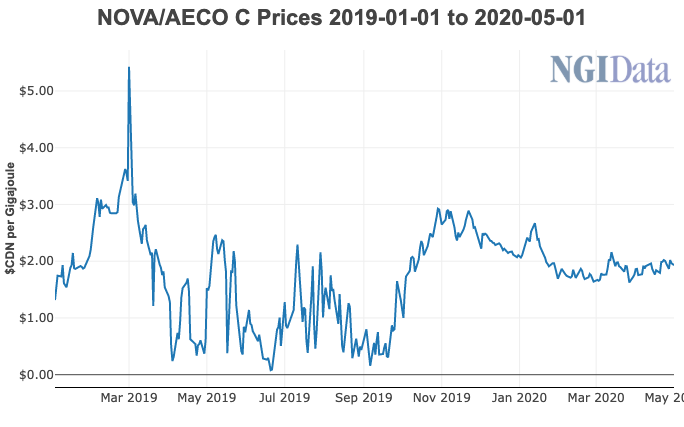 The ruling came a couple weeks after the Calgary-based operator had secured financial backing from the Alberta government and begun construction on Keystone, which is meant to transport oilsands output to refining markets on the Gulf Coast.

Although the official in-service date remains unchanged, TC’s Bevin Wirzba, vice president for liquids pipelines, cautioned during the call that the April ruling could potentially result in “up to a year delay on the ultimate project, much like many of the circumstances that we’ve faced historically.”

Wirzba said management “had always anticipated…the need to be agile in our construction management and our planning,” adding that “there is the ability to advance construction in different ways and avoid certain routes” amid the impasse.

Keystone is to require about $8 billion of additional investment and is backed by new 20-year take-or-pay contracts, Girling said.

Average receipts were about 12.2 Bcf/d on the Nova Gas Transmission Ltd. (NGTL) System, 3.2 Bcf/d on the Canadian Mainline Western System, 26 Bcf/d across the broader U.S. pipeline network, and 1.5 Bcf/d on the Mexico pipelines, Girling said.

“Each of these amounts are similar to or greater than the volumes moved over the same period last year,” Girling told analysts. “At the same time, we continue to advance more than $27 billion of capital projects associated with our natural gas pipeline businesses.”

The projects include an expansion of the NGTL system, capacity additions to the United States network, the Villa de Reyes and Tula pipelines in Mexico, and the Coastal GasLink pipeline in British Columbia.

Girling said that while it’s too early to determine whether the pandemic will have a long-term impact on TC Energy’s capital programs, the company does expect some slowdown of construction activities and capital expansion in 2020 due to Covid-19 safety protocols.

TC Energy’s Stanley Chapman, president for U.S. natural gas pipelines, said that more than half of the firm’s large producer customers are flowing at load factors above 90%, which “tells us that producers are continuing to get proper value for the capacity that they hold on our system…”

“The availability of our infrastructure has remained largely unimpacted by recent events with utilization levels robust and in line with historical norms,” said Girling, who added that with most of the firm’s earnings generated from regulated assets and/or long-term contracts, “we are largely insulated from short-term volatility associated with volume throughput and commodity prices.”

The NGTL settlement “is responsive to [customers’] needs during this challenging time, while providing us with a stable return as we invest billions of dollars in pipeline infrastructure to enhance their connectivity of natural gas supply to premium markets,” Girling said.

CFO Donald Marchand said that in response to the volatile market conditions and reduced liquidity in the market due to Covid-19, TC Energy in April secured about C$6.6 billion of additional financial capacity through long-term debt issuances in Canada and the United States “on compelling terms, along with the establishment of $2 billion of incremental committed credit facilities.”

Earnings per share and funds generated from operations rose by 10% and 17%, respectively, which Girling attributed to some C$1.6 billion of capacity projects that have entered service so far in 2020.