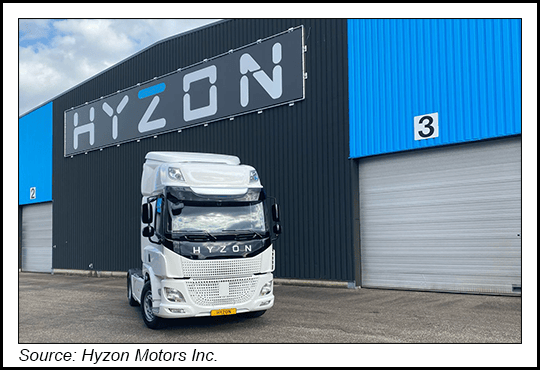 The companies announced the partnership on Wednesday to construct, operate and own the hubs.

“Through this agreement, we are marrying the expertise of TC Energy in natural gas and renewables with that of Hyzon, which has its technology in fuel cell electric vehicles being delivered around the world today,” said TC’s Corey Hessen, president of Power and Storage.

“Our work with TC Energy has already begun,” Hyzon Chief Strategy Officer Parker Meeks told NGI. “We are currently evaluating production sites and expect to have systems online in the very near term.”

TC spokesperson Jennifer Link told NGI that the company is “still in the early phases of evaluation for any production hub.” She said that it can take “several months” to build a 20-mt/d hub after a site has been located and permitted.

The TC-Hyzon partnership represents the latest in a string of recent initiatives to promote hydrogen infrastructure development.

TC and Hyzon, headquartered in Rochester, N.Y., plan to evaluate potential hub sites “across multiple states and provinces” to deliver hydrogen to fuel heavy-duty vehicles. The companies said they would prioritize locations “near existing and potential customer demand” to support Hyzon “back-to-base” vehicle fleet deployments. In addition, each hub is expected to produce up to 20 metric tons per day (mt/d) of hydrogen.

Is There Momentum For FCEVs?

Meeks said California today has the “strongest momentum” in the United States in terms of integrating heavy-duty hydrogen vehicles “given the significant subsidies available across fuel and zero emissions trucks.”

“Many other states are gaining traction for near-term deployments with similar policies in place or in discussions, including Oregon, Washington state, New York, Massachusetts and Colorado. Additionally, several states have near-term customer pipeline in early adopters with strong emissions reductions in their corporate sustainability goals.”

“We expect the demand in Canada to only grow if a nationwide Clean Fuels Standard is instituted, which we understand is in consideration,” said Meeks.

TC under the agreement would be designated as the hub operator, and it would be power and gas commodities supplier. In addition, TC would provide asset development, management services and power and gas sales marketing.

The hubs, said the TC and Hyzon management, are to focus on “low-to-negative carbon intensity hydrogen” produced from renewable natural gas (RNG), biogas and “other sustainable sources.”

“Our hubs with Hyzon will focus on biomass-to-hydrogen production processes to produce renewable hydrogen,” said Link. “We will evaluate blending biomass, with conventional natural gas and carbon capture, if the size of the project exceeds renewable fuel availability.”

“By partnering with TC Energy on modular hydrogen production hubs from a range of sustainable production feedstocks close to Hyzon fleet deployments we can fully decarbonize mobility at a very low cost and time to build,” said Meeks. “This agreement is just one of the many steps and strategic partnerships that Hyzon Motors will be announcing in the coming months to confirm our ability to bring clean hydrogen infrastructure to market with our vehicles in the very near term.”

“We will explore and evaluate a number of locations to serve hydrogen fuel cell demand,” said Link. “We are looking at the entire U.S. and Canada and will make location announcements as we advance development.”

Meeks said the collaboration would identify and pursue hydrogen production and supply opportunities across end markets, “anywhere that decarbonization of their operations can benefit from low-to-negative carbon intensity hydrogen.”

“Refining and chemical plants are a great example, as we certainly see potential for those customers, whether their operations are in Houston, Louisiana, California, Pennsylvania or elsewhere,” he said.

“Distributed/remote power from hydrogen is a significant market as well to power remote industrial operations such as oil and gas, mining and many others,” said Meeks. “These are all markets that we will evaluate and pursue together, where many of those same customers can use hydrogen in many forms, from fueling heavy-duty vehicles in their fleets and operations to direct operational usage as mentioned above.”

Hessen said TC was “committed to exploring and developing energy solutions in North America for our own assets as well as those of customers to meet their energy transition needs. We believe we are well positioned to execute on the development of hydrogen and carbon dioxide pipelines.”

Recent announcements by TC, DT Midstream and others come at a time when policymakers in the United States and Canada are considering measures to promote hydrogen infrastructure development.

“With a global market estimated to be worth C$2.5 trillion a year by 2050, hydrogen could be Alberta’s next great energy opportunity,” said Alberta Premier Jason Kenney.

South of the border, a bipartisan group of U.S. senators recently introduced legislation that they contend will support hydrogen development across industries and transport sectors.

“We are very active in both Canadian and American federal, regional and state hydrogen ecosystem creation and incentive programs,” Meeks told NGI. “Alberta is a province where we have significant direct customer and program engagement, and we will pursue similar hydrogen ecosystem programs, both incentive/government-driven and industry association-driven, in both countries.”

The collaboration with Hyzon marks yet another hydrogen FCEV partnership for TC, which last month signed a deal to supply hydrogen to Nikola Corp.