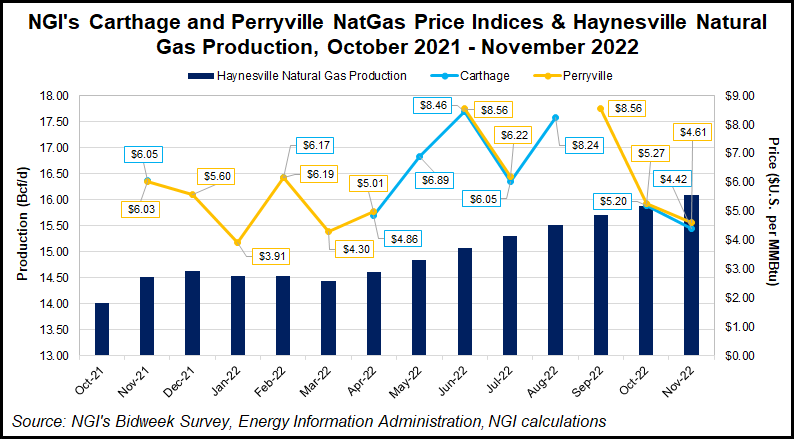 CEO François Poirier hosted a call on Wednesday (Nov. 9) to discuss the Calgary-based pipeline juggernaut’s third quarter earnings. Poirier and his team highlighted the $400 million Gillis Access project in Louisiana, which the company sanctioned during the quarter.

The 1.5 Bcf/d header system “will connect growing supply from the Haynesville basin to Louisiana markets including the rapidly expanding” Louisiana liquefied natural gas export market, management said. TC is aiming for the project to enter service in summer 2024.

“Essentially, the project is a header system that can be further expanded over time within the state of Louisiana, that will ultimately connect the Haynesville supplies that are going to show up at a point called Gillis to serve downstream LNG, industrial and other markets within the state,” said Vice President Stanley Chapman, who oversees U.S. and Mexico natural gas pipelines.

Chapman said with Gillis project and the other projects in service on the drawing board, “we’re going to increase the flowing LNG feed gas that we have from about 3 Bcf today, which is roughly a 30% market share, to over 6 Bcf or 35% market share in 2025.

“So we see continued opportunities in a target-rich environment to continue to expand our best-in-class footprint, particularly across the state of Louisiana to serve LNG loads, particularly important as energy security and energy reliability becomes a forward theme with respect to world energy demand.”

The third quarter also saw the start up of the Louisiana XPress natural gas pipeline, which has increased TC’s market share from 25% to about 30% of volumes destined for export from third-party LNG facilities.

The start of commercial service on Louisiana Xpress, along with expansions and upgrades to TC’s ANR Pipeline Co. system, added about 1 Bcf/d of U.S. gas capacity during 3Q2022.

In Canada, the company is “laser focused” on completing the Coastal GasLink pipeline by the end of 2023, said TC’s Bevin Wirzba, executive vice president who oversees Canadian natural gas and liquids pipelines.

TC also expects “to announce and close C$5 billion plus of asset divestitures within 2023,” Poirier told analysts. He declined to go into specifics on which assets the firm is planning to offload.

“Our portfolio remains resilient despite the economic headwinds facing the broader market,” said the CEO. “Demand for our services across our North American portfolio remains high and we continue to see strong utilization, availability, and overall asset performance.”

He added that the company remains “opportunity rich,” citing a $34 billion portfolio of fully sanctioned, secured capital projects under development. TC is now targeting full-year 2022 capital spending of about $9.5 billion, and expects to sanction about $5 billion of projects per year throughout the decade, Poirier said.

In Canada, TC sanctioned the roughly C$600 million Valhalla North and Berland River project in November, which “will use non-emitting electric compression to connect migrating supply to key demand markets on our NGTL system with expected in-service in 2026,” management said.

The firm also signed definitive agreements in July with LNG Canada to resolve disputes over anticipated costs of the Coastal GasLink pipeline project. The estimated cost of the 75% complete project has risen to C$11.2 billion, management said, “which reflects an increase from the original project cost estimate due to scope increases and the impacts of Covid-19, weather and other events outside Coastal GasLink LP’s control…

“Current market conditions, including inflationary impacts on labor costs, could result in final project costs that are higher than this new estimate. Mechanical in-service is expected to be reached by the end of 2023.”

In Mexico, meanwhile, TC highlighted an agreement with state power company Comisión Federal de Electricidad in August for the completion and development of natural gas infrastructure in the country’s central and southeast regions.

TC placed the north section of its Villa de Reyes pipeline and the east section of the Tula pipeline into commercial service during 3Q2022, and reached a final investment decision on the US$4.5 billion Southeast Gateway pipeline. The 1.3 Bcf/d, 444-mile offshore pipeline is meant to shore up gas supply to southeastern Mexico and is expected to be in-service by mid-2025.

The lateral and south sections of the Villa de Reyes pipeline, meanwhile, are expected to begin commercial service in 2023, the company said. “Additionally, we have agreed to jointly develop and complete the central segment of the Tula pipeline,” if it is sanctioned. 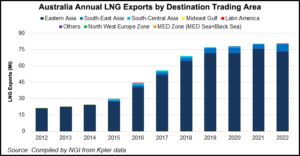