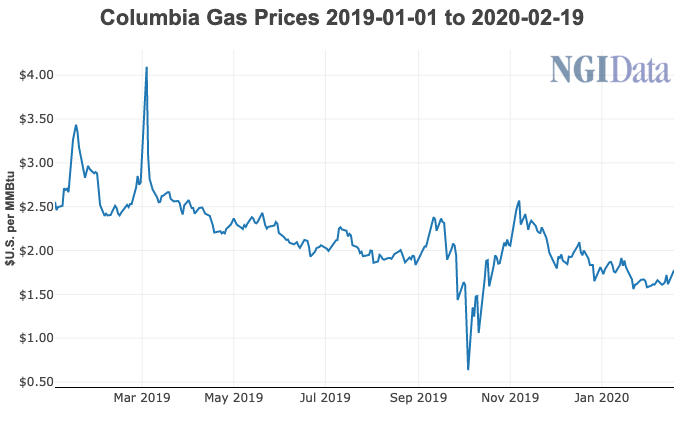 “I think most importantly, out of the Appalachian Basin we’re finally starting to see the producers tap the brakes and that production has declined,” TC’s Stan Chapman, president of U.S. natural gas pipelines, told analysts during the firm’s fourth quarter 2019 earnings call.

He cited that gas production from the Appalachian region has fallen to about 31.8 Bcf/d in February from slightly more than 33 Bcf/d in November, a decline of about 5%.

Chapman said this winter has been relatively mild, but TC still saw the second highest all-time sendout across its North American pipeline network on Jan. 20. “So again, strong demand across the entire system,” he said.

Asked by an analyst whether TC has had to provide any toll relief to producers in the Northeast because of low gas prices, Chapman said, “we haven’t provided any relief to our customers other than working with them in the normal course of business to maybe amend receipt points or delivery points and give them flexibility to get the greatest usage they can out of their contracts.”

TC is “seeing really strong usage on our producer contracts,” and the top producers are flowing at load factors of 80-96%, “which basically tells me that they’re getting proper value for their capacity and we’re seeing strong load factors across our entire system,” Chapman said.

He also cited that TC’s Appalachian customers have access to TC’s Columbia Gas Transmission LLC (TCO) pipeline system, where gas is trading at a premium to the Texas Eastern Transmission (Tetco) and Dominion Energy Inc. pools, which are the other two liquid trading points in Appalachia.

Moreover, most of TC’s Appalachian customers also have access to Gulf Coast markets via TC’S Columbia Gulf Transmission LLC system, “and that trades at a 20-cent premium to Tetco or Dominion pool,” Chapman said.

The two projects comprise the 2023 NGTL Intra-Basin System Expansion to deliver gas to markets in Alberta via the Nova Gas Transmission Ltd. (NGTL) system, and the $300 million Alberta XPress project, which entails an expansion of the ANR Pipeline Co. system “to provide a seamless path” to the Gulf Coast for Canadian gas production. Alberta XPress is expected to enter service in 2022.

Concurrent with the sale announced in December of a 65% stake in the 416-mile Coastal Gaslink pipeline project in Western Canada, which would link to the Royal Dutch Shell plc-led LNG Canada export project, the company expects the pipeline to finalize funding for up to 80% of the capital expenditures (capex) during construction.

Both transactions are expected to close by the end of June, the company said. TC would still be responsible for constructing and operating the pipeline.

All necessary regulatory permits have been approved for the 2.1 Bcf/d first phase of Coastal Gaslink, which is slated to enter service in 2023. The project’s capacity could potentially be expanded to up to 5 Bcf/d.

TC management said it is positioned to fund a C$30 billion ($22.7 billion) portfolio of secured growth projects without issuing additional common shares, adding that the “strong financial position will be further bolstered by the completion of pending portfolio management and project financing expected in the first half of 2020.”