TC Energy Corp. and the Alberta government late Wednesday announced formal and final termination of the suspended Keystone XL oil export pipeline, but they reserved the right to seek compensation for rejection of the project in the United States. 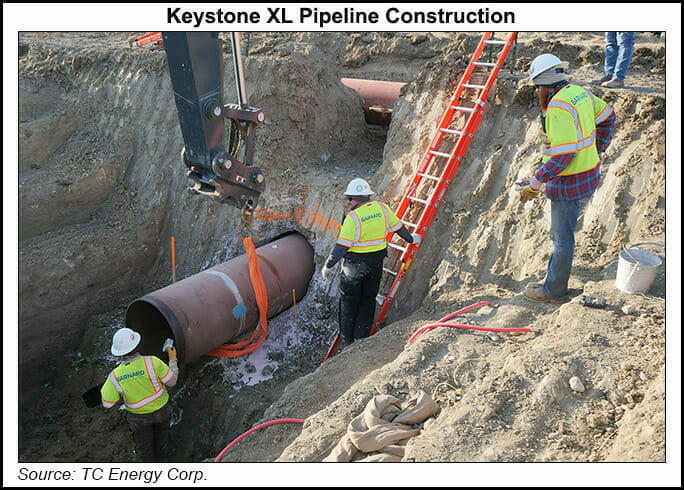 “An orderly exit” would honor remaining environmental and regulatory commitments, said the Calgary pipeline company and Alberta officials. “The two parties will continue to explore all options to recoup the government’s investment in the project.”

The formal termination transfers about half the loss to the Alberta government. Officials had not disclosed how much its loss would be as of Wednesday but predicted it would be within C$1.3 billion ($1.04 billion).

From a financial point of view, canceling Keystone cleared away a cloud that had darkened TC Energy’s outlook for nearly a decade because of regulatory and political conflict.

“We had viewed the planned construction of the pipeline as credit negative for TC Energy because of the very high level of execution risk related to environmental, social and governance factors that the project entailed,” said Moody’s Investors Service analyst Gavin MacFarlane.

“Keystone XL has been a symbol for the challenges the sector has faced in getting high profile projects permitted and built not just in Western Canada but across North America.”

TC Energy President Francois Poirier predicted Canadian and U.S. services by the pipeline and power conglomerate would continue to expand regardless of the Keystone loss.

“Looking forward, there is tremendous opportunity for TC Energy in the energy transition with its irreplaceable asset footprint, financial strength and organizational capabilities positioning it to capture further significant and compelling growth.”

The U.S. Chamber of Commerce said it understood TC Energy’s decision to cancel the project.

The Keystone termination “is understandable, but necessary only because of the policy errors of the administration,” said the Chamber’s Marty Durbin, president of the Global Energy Institute. “This episode is also a black mark for our relationship with our close ally to the north, Canada, and will have repercussions for our ability to attract private investment for years to come,” said Durbin.

Shortly after the news hit Wednesday evening, the American Petroleum Institute (API) expressed disappointment. “It’s unfortunate that political obstructionism led to the termination of #KeystoneXL,” the API tweeted. “This is a blow to U.S. energy security and a blow to the thousands of good-paying union jobs this project would have supported.”

Opponents declared victory, with some considering it a historic turning point for environmental justice. “The cancellation of Keystone XL is a reminder that this project was never needed and never in the public interest, and that it is time for the fossil fuel era to rapidly come to a close,” said Oil Change International communications director David Turnbull.