A native ownership offer has been accepted by most of the tribes holding cooperation and benefits agreements with Coastal GasLink (CGL), a natural gas pipeline that TC Energy Corp. is building to supply the liquefied natural gas (LNG) export terminal underway in British Columbia (BC). 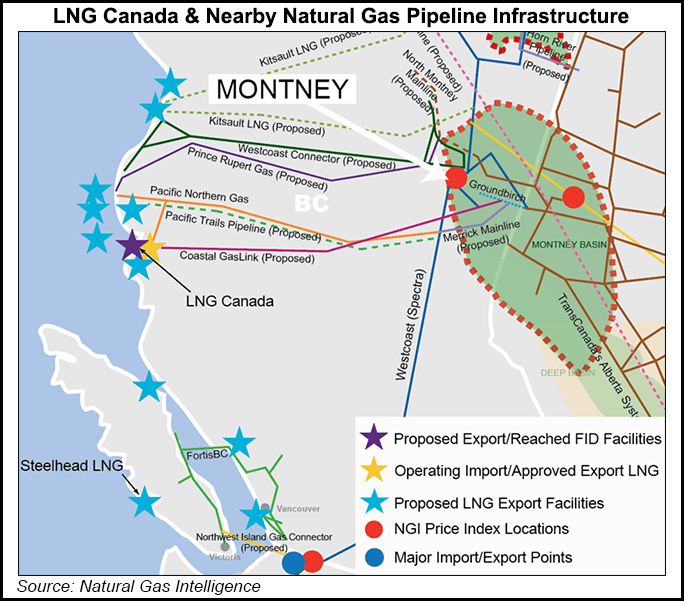 Sixteen of 20 tribes came to terms for the system, which would supply the Shell plc-led LNG Canada facility.

TC announced purchase option agreements for a 10% share in the 670-kilometer (416-mile) conduit with groups formed by the prospective buyers that are CGL First Nations LLP and FN CGL Pipeline LP.

Admission to the industrial group would make a start on healing a long-standing native sore spot, Napoleon said.

“For years we have watched industry and governments generate revenues from the operations of their projects, while we live with the impacts.”

The CGL deal stands out as a “historic milestone,” said Cheslatta Carrier Nation Chief Corrina Leween. “For many of us, this marks the first time that our Nations have been included as owners in a major natural resource project that is crossing our territories.”

“Together, as business partners, we have the opportunity to learn, grow and change the way energy is developed in Canada,” he said. “This is one of the ways we can advance reconciliation.”

The native pipeline investment options would be exercised when CGL begins deliveries, initially of 2.1 Bcf/d through a 48-inch diameter system. The pipeline system would have capacity to move up to 5 Bcf/d.

The price for exercising the native ownership options, other commercial details, the project’s cost and its target date for starting service were not disclosed. TC has reported construction expenses are on the rise and completion is likely delayed.

BC public health restrictions on northern industrial activity affected the CGL schedule during early stages of the Covid-19 pandemic. Protests by a native group that dissents from the tribal pipeline agreements also have disrupted a remote work site.

The CGL options agreement is the fifth Canadian effort by industry and tribal leaders to create a permanent native ownership stake in a major pipeline project.

The first offers, one for native shares in a Mackenzie Valley gas conduit and another for the Northern Gateway and Keystone XL oil export lines, failed because the projects died.

Parallel to the CGL deal, native groups are working on an ownership role in the Trans Mountain Pipeline expansion under construction across Alberta and BC.