Targa Resources Corp. brought online a handful of expansion projects in the third quarter, with the bulk of the expansions taking place in the Permian Basin, management said during a conference call to discuss 3Q2019 earnings. 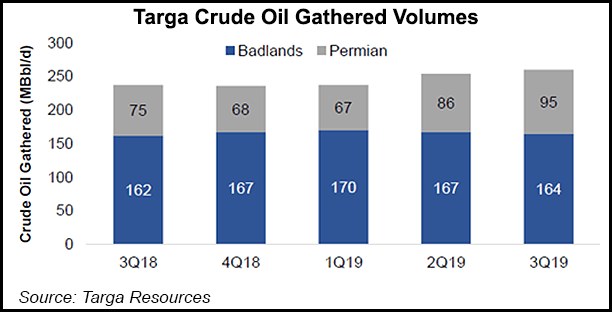 Targa finished ramping up its 250 MMcf/d cryogenic natural gas processing Falcon Plant in the Delaware sub-basin during the third quarter, one quarter ahead of the originally planned startup. Targo also started up its 250 MMcf/d Pembrook Plant in Permian’s Midland Basin and its 200 MMcf/d Little Missouri Four Plant in the Badlands in September.

Targa also ramped up its 300,000 b/d Grand Prix NGL Pipeline, which runs from the Permian to the market hub in Mont Belvieu, TX, to an initial capacity of 230,000 b/d during the quarter. The company plans to expand the pipeline north into southern Oklahoma during 2020, but it did not specify an expected in-service date.

Targa is also “highly likely” to announce a new Permian-based processing plant, said President Matthew Meloy, but did not give specifics on timing.

The company’s investment in gas gathering and processing, as well as NGL takeaway capacity, coincides with the monetization of Targa’s crude gathering assets in the Permian Basin.

Targa inked a deal to sell its crude gathering assets in the Permian Basin’s Delaware sub-basin for $135 million, and management said it was evaluating additional Permian crude asset sales during the call.

“We’re also evaluating the potential sales of remaining Permian crude storage and gathering assets in the Midland basin,” said CFO Jennifer Kneale. The $135 million deal, which was announced after the company released its 3Q2019 earnings results late last week, should close during the fourth quarter, she said.

Targa is looking across its asset base for monetization opportunities, zeroing in on assets that might be noncore, or “complementary,” but the Midland crude business is the only one that’s currently on the table, Meloy said. Targa has engaged Jefferies LLC for the asset evaluation and potential sale, Meloy noted.

The third quarter marked a spending threshold for Targa given the startup of most of its major growth projects. The 2020 net growth capex is forecast to decline to $1.2-1.3 billion.

Targa did not specify a forecast for maintenance capex in 2020, but Kneale said management did not expect a “meaningful” change in its maintenance spending.