After posting record volumes across its gathering and processing (G&P) systems during the third quarter, Targa Resources Corp. has sanctioned two midstream projects in the Permian Basin. 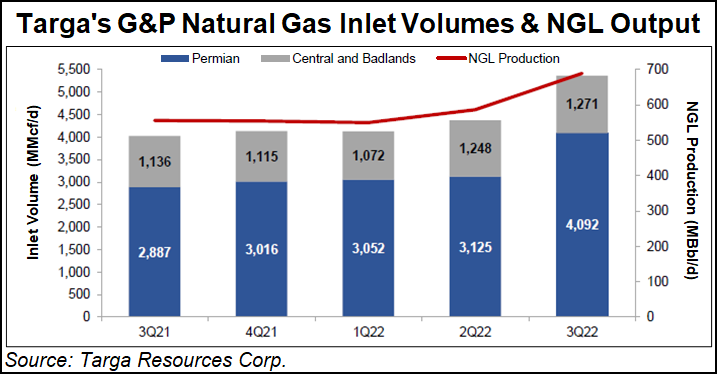 A second natural gas processing plant at the Wildcat facility in the Delaware sub-basin of the Permian would boost processing capacity by 275 MMcf/d. To be called Wildcat II, Houston-based Targa’s decision to move forward with the project is in response to “strong producer activity levels and to meet the infrastructure needs of our customers across the Delaware,” according to Targa’s Patrick McDonie, who is president of G&P.

The plant is expected to begin operations in 1Q2024.

Speaking with investors on the quarterly earnings call, McDonie said inlet volumes across the Delaware system increased 7% sequentially. This did not include contributions from the gas processing assets acquired from Lucid Energy Delaware LLC, including the Red Hills VI plant in Lea County, NM, that was still under construction at the time.

Targa commenced operations on the 230 MMcf/d Red Hills VI plant in late September, “which was full at start-up,” according to McDonie. “Our overall Delaware system is also running…very highly utilized and volumes continue to ramp. And we remain on track to bring our new 275 MMcf/d Midway plant online during the second quarter of 2023.”

The midstreamer is “playing some catch-up” on the acquired Delaware assets, McDonie said, noting the full utilization of Red Hills VI. He explained that volumes were greater than capacity, so Targa was able to offload some gas onto its Western Delaware plants, which had spare capacity. Of the acquisition, he said “the integration has gone pretty seamlessly. The volume growth is substantial.”

The recently added projects and those newly sanctioned are “a positive reflection of how quickly current volumes are increasing and future volumes are expected to increase,” McDonie said. He noted that Wildcat II customers are a mix of public and private exploration and production (E&P) companies, with “a big chunk” of dedications on both systems by major E&Ps. Targa also has several mid-sized to smaller customers that are “extremely active,” some of which are long-time customers along with some new ones.

Targa also hasn’t seen “an appreciable slowdown” in drilling activity in the Permian, according to McDonie. “The people that have employed rigs continue to employ them and just move them across our acreage and continue to drill. Certainly, we’ve been fortunate that a lot of those rigs are running on our acreage. But I would tell you that our infrastructure underpins a lot of the best acreage in the Delaware Basin and also obviously in the Midland Basin as seen by many years of history.

“You’ve seen the Exxons, the Chevrons, the big guys come out and announce what their plans are for next year. And there is no appreciable slowdown from them. Chevron is actually adding rigs. Our smaller guys, the economics are very good, and they continue to stay active. So we have not seen a slowdown,” McDonie said.

In addition to the new gas processing plants, Targa is adding incremental treating infrastructure in the Delaware to increase sour gas handling capabilities. This “enhances our ability to capture and handle increasing sour gas production and drive attractive returns from trading fees,” according to McDonie.

In addition, Targa would gain the ability to capture carbon dioxide from the trading process and sequester the emissions in its acid gas injection storage wells. Class II permits are already in hand, and the company is working to obtain additional Class II and Class VI permits to further enhance its carbon capture abilities. The midstreamer expects to begin receiving 45Q tax credits by late 2023.

The strong volumes extended into the Midland sub-basin, where volumes rose 8% sequentially, Targa reported. The company’s new Legacy plant began operations late in the third quarter, and management now expects full year average Permian volume growth, not including the Lucid assets, to be at the high end of its initial 12-15% year/year volume guidance.

The 275 MMcf/d Legacy II plant, meanwhile, remains on track to begin operations during 2Q2023, and the 275 MMcf/d Greenwood plant is expected online by the end of next year.

“We expect both plants to be highly utilized when they come online next year,” McDonie said.

NGL Pipeline In The Works

Targa also has kicked off construction of the Daytona NGL pipeline. The $650 million project would transport volumes from the Permian and connect to the existing segment of Grand Prix in North Texas to move volumes to Mont Belvieu.

Targa would own 75% of Daytona, while Blackstone Energy Partners is to own 25%. Daytona is expected to be in service by the end of 2024.

Targa’s Scott Pryor, president of Logistics and Transportation, said the outlook for continued NGL transportation volume growth is strong. He noted that the Daytona project leverages the capacity available to move volumes into Mont Belvieu, while also complementing the Grand Prix West leg.

Targa repurchased nearly 1.16 million shares of common stock during the quarter at a weighted average price of $63.06 for a total net cost of $72.9 million. There was $171.8 million remaining under the company’s $500 million common share repurchase program as of Sept. 30.