The Gulf Coast Express Pipeline Project (GCX), designed to carry 1.92 Bcf/d from the Permian Basin to the Texas Gulf Coast, on Thursday added Targa Resources Corp. as a third partner. 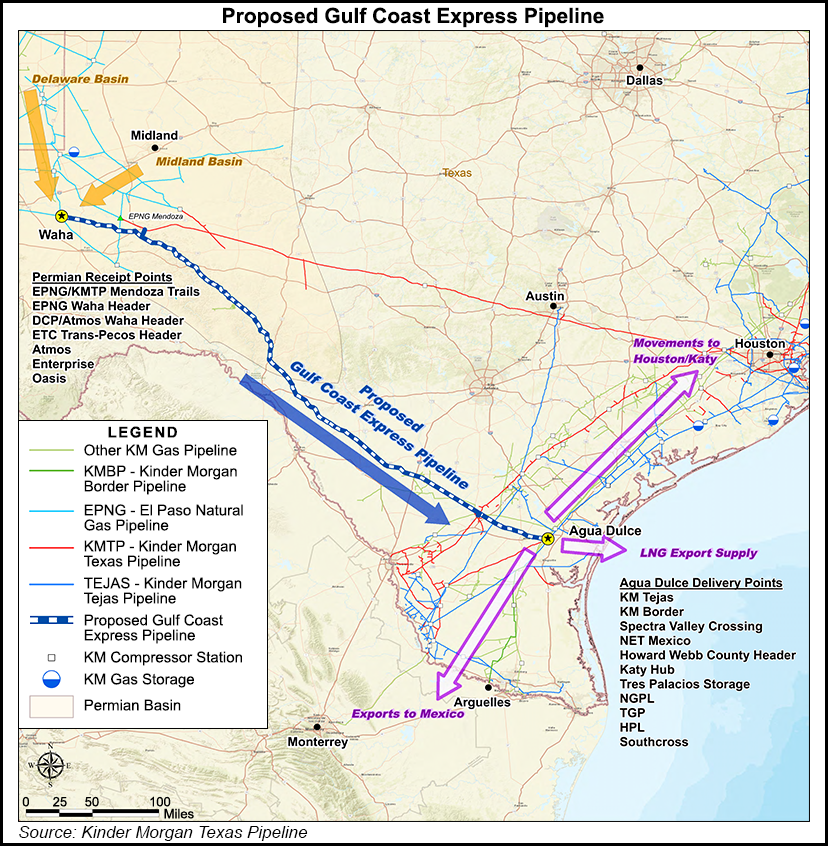 Targa and DCP Midstream tentatively agreed to commit gas volumes to the project, including volumes provided by Pioneer Natural Resources Co., a joint owner in Targa’s WestTX Permian Basin gas system and one of the largest producers in the Permian.

“With DCP Midstream and Targa, we now have two of the premier gathering and processing supply aggregators in the Permian Basin on board, as well as one of the basin’s largest producers with Pioneer,” said Kinder Morgan Natural Gas Midstream President Duane Kokinda. “The commitments of these parties confirm our premise that combining supply source optionality in the basin with unparalleled market access on the Agua Dulce end provides an attractive takeaway solution for the parties developing natural resources in the Permian Basin.”

GCX initially was launched in March, as demand pull from exports to Mexico and from liquefied natural gas terminals on the Gulf Coast bolstered KMI’s outlook for expanding its gas transportation business.

As Permian gas production surges to levels that could essentially tap out the physical capabilities of existing infrastructure in and around the supply region by 2019, the horse race is on for companies to build pipelines that could connect supply to new demand markets not too far from home.

Gas production in the Permian, currently around 6.6 Bcf/d, is expected to grow to between 9 Bcf/d and 10 Bcf/d by the end of 2019 as associated gas growth surges, thanks to rapid oil drilling in the basin.

As envisioned, the 1.92 Bcf/d GCX system would have a lateral to the Midland sub-basin in West Texas with about 50 miles of 36-inch diameter pipeline and associated compression.

The gasline is to serve processing plants owned by Targa and facilities it jointly owns with Pioneer. The Dallas-based independent has a 27% interest in Targa’s WestTX gas processing system and a 30% stake in the West Texas Gas South Sales Ranch system.

In-service is set for the second half of 2019, pending a final investment decision by the partners and anticipated shipper agreements.

Under the letter of intent, KMI would build, operate and own a half-stake in the GCX, while DCP and Targa each would hold a 25% equity interest.

“We are excited to have the opportunity to expand our portfolio of integrated assets and customer offerings in the Permian which would complement our Sand Hills expansions,” said DCP CEO Wouter van Kempen. “This is a strong collaboration of players that draws upon our combined capabilities to provide a competitive and capital efficient solution to the industry.”

Targa CEO Joe Bob Perkins said that given the significance of the company’s Permian footprint, GCX would provide customers more flexibility and access to additional markets.

Deliveries of gas into the Agua Dulce area near Corpus Christi are to include points into KMTP’s existing Gulf Coast network, KMI-owned intrastate affiliates KM Tejas and KM Border pipelines, the Valley Crossing pipeline, the NET Mexico header and other intrastate and interstate systems.