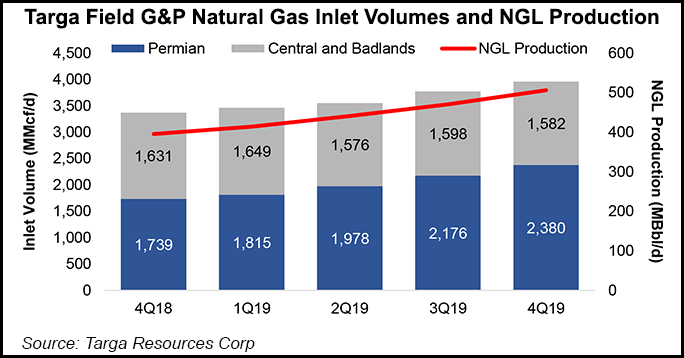 Several exploration and production companies already have announced further spending and drilling activity cuts following the tailspin in the oil markets, but it may be too early to assess any potential impacts to Targa’s midstream business. Even before the oil price collapse, when the coronavirus was largely unknown in the industry, the incoming CEO reaffirmed his confidence in the business during a fourth quarter earnings call last month.

“While there may be some uncertainty in global commodity markets related to the coronavirus and other macro factors, there is strength in what we can see for core business in 2020,” said CEO Matt Meloy, who took the helm from Joe Bob Perkins on March 1. Although Targa plans to continue to build additional infrastructure, “we’re going to need some fee-based protection for us to continue to spend capital.

“At gas prices between zero and $1 at Waha,” and low natural gas liquids (NGL) prices, “we’re going to need some fee-based protection for that investment. And we’ve had good success with our producers who understand that and want us to continue to move their volumes.”

Perkins, now executive chairman, said management also is working to add fee-based floors and fee-based components to existing contracts, as well as new volumes in the Permian. “We’re in various stages with our producers and discussing with them how we can meet their needs, and the fee-based protection that we’re going to need, to be able to continue to meet their needs.”

Total field volumes increased 15% year/year in 2019, driven by a 32% increase in Permian volumes and an 18% sequential increase in fourth quarter volumes. Meloy said volumes from the Permian and the Grand Prix NGL system led to higher-than-expected volumes, while the additional optimization of the natural gas and NGL business also supported growth.

Meloy said the Permian systems remain “highly utilized,” with volumes in the Midland sub-basin climbing 6% sequentially in the fourth quarter following the in-service of the 250 MMcf/d Pembrook processing plant. The midstreamer also is assessing the timing of when another Midland plant would be needed in 2021.

Targa brought online the Falcon gas processing plant in the Delaware sub-basin, helping to boost regional volumes in the fourth quarter sequentially by 18% as the plant ramped up to full capacity.

The company also benefited from “much-needed” incremental residue gas takeaway in the Permian following the in-service of Kinder Morgan Inc.’s Gulf Coast Express pipeline. The Peregrine plant remains on schedule to begin operations in the second quarter, according to Meloy.

“Looking forward, we expect strong volume growth across our Permian Midland and Delaware systems in 2020,” the CEO said. “Our growth is largely underpinned by the majors and large independents who are forecasting continued volume growth.”

Targa expects Permian natural gas inlet volumes for 2020 to increase about 20% on average over 2019 volumes. In addition, the company expects continued growth in Badlands crude and gas gathered volumes in North Dakota and modest declines in the central region.

Meanwhile, the Grand Prix pipeline continues to perform “very well,” as deliveries into the NGL hub in Mont Belvieu, TX, increased to average 266,000 b/d during the fourth quarter with the addition of the Falcon plant and some shorter-term NGL transportation volumes. Management expects Grand Prix volumes into Mont Belvieu to increase and average 275,000-300,000 b/d in 2020.

Fractionation volumes also increased in 2019, jumping 22% year/year as the firm’s fractionation complex continues to operate at a high utilization rate, according to Meloy. The seventh train is expected to be completed this month, with the eighth on target for startup late in the third quarter.

Full-year 2020 adjusted earnings are forecast at $1.63-1.75 billion, which would be an 18% increase over 2019 at the midpoint. However, first quarter earnings are expected to be lower year/year “with headwinds associated with lower commodity prices, lower hedge gains and higher expected operating expenses in G&A,” according to Kneale.

“I think that for us the guidance range is really reflective of our best estimates right now for the year, given the visibility that we have into the year,” she said. “2019 was very strong for us. We believe that there will continue to be opportunities for our assets to hopefully outperform in 2020. But there is also uncertainty related to prices, the coronavirus, producer activity levels, particularly in the back half of the year…”

Overall, 2020 operating expenses are expected to come in higher than 2019 because of the new assets in service and those coming online this year. Targa’s expectations for 2020, before the oil market’s disintegration, were predicated on NGL composite barrel prices averaging 45 cents/gallon, crude averaging $52/bbl, Henry Hub natural gas prices averaging $2/MMBtu and Waha gas averaging 50 cents for the year.

Targa reported a fourth quarter 2019 net loss of $112.8 million, compared with a net loss of $106.4 million in the year-ago period. Included in the 4Q2019 losses was a one-time loss of $229.0 million from asset impairments following a continuing decline in natural gas production in the Barnett Shale in North Texas and Gulf of Mexico because of sustained low commodity price environment.