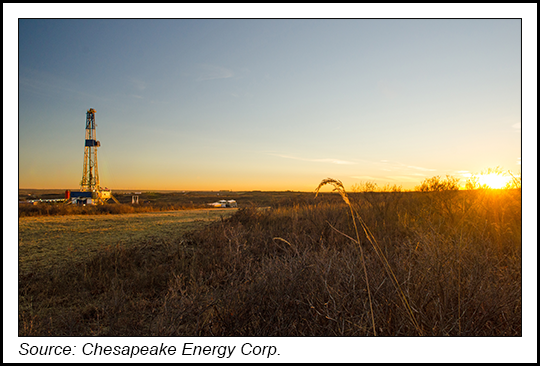 Both Oklahoma City producers reached a deal after Tapstone successfully bid for the assets during a bankruptcy auction last week. Tapstone had been selected as the stalking horse bidder last month, when the U.S. Bankruptcy Court for the Southern District of Texas approved the sale.

The sales includes more than 700,000 net acres covering a wide variety of producing formations in west and northwest Oklahoma. Tapstone is focused on the Anadarko Basin in Oklahoma, Texas and Kansas. Its core assets are located in Oklahoma’s unconventional STACK play, aka the Sooner Trend of the Anadarko Basin, mostly in Canadian and Kingfisher counties. It also has mature legacy assets in all three states.

Chesapeake, which filed for Chapter 11 bankruptcy protection in June to wipe out $7 billion of debt, was once one of Oklahoma’s largest oil and gas producers. But it hasn’t focused on those properties in recent years, instead spending in places like the Powder River Basin of Wyoming and Eagle Ford Shale in Texas to drive more oil production.

At one time or another, Chesapeake has operated in nearly all of the Lower 48’s major plays, but it has whittled its asset base down in recent years as part of cost-cutting initiatives it tried undertaking before filing bankruptcy. It also has a sharp focus on the Marcellus Shale in Pennsylvania and the Haynesville Shale in Louisiana.

The Midcontinent accounted for just 12,000 boe/d of Chesapeake’s 3Q2020 production as the company continues to work through the bankruptcy proceedings. Overall, Chesapeake produced 445,000 boe/d in the third quarter.