Natural gas futures worked lower Thursday morning following the release of government storage figures that were greater than what the market was looking for. 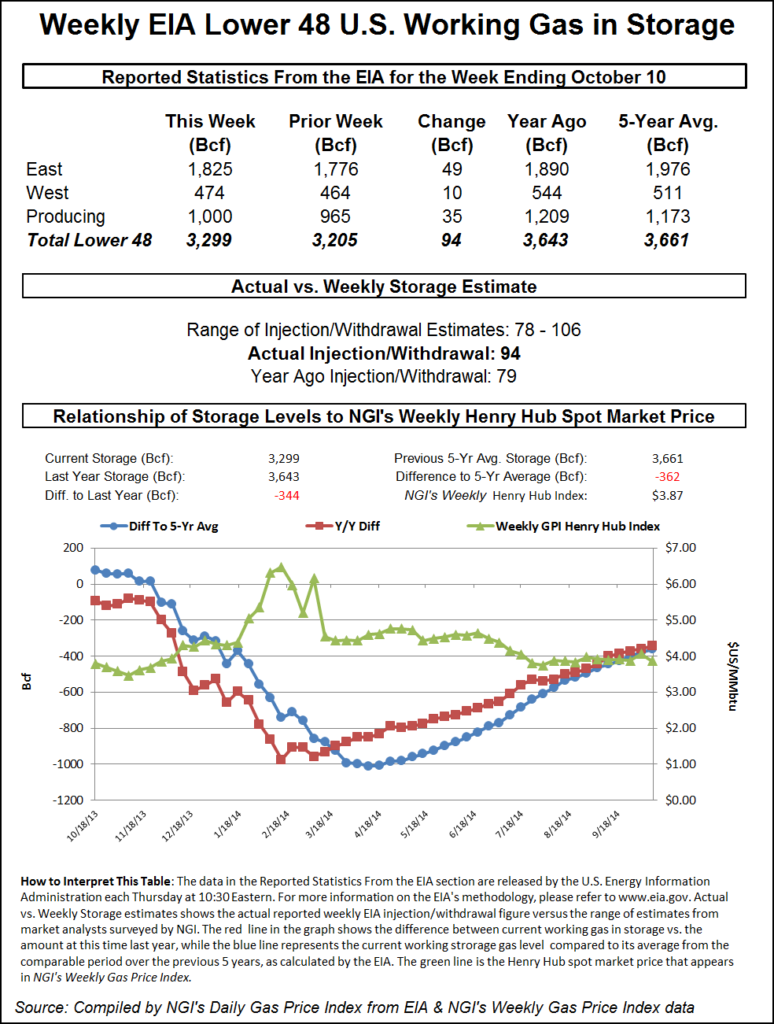 The injection of 94 Bcf was about 5 Bcf greater than trader expectations, which came in about 89 Bcf. For the week ended Oct. 10, the Energy Information Administration reported an increase of 94 Bcf in its 10:30 a.m. EDT release. November futures sank to a low of $3.744 soon after the number was released and by 10:45 a.m. November was trading at $3.778, down 2.2 cents from Wednesday’s settlement.

A Reuters survey of 25 traders’ and analysts’ forecasts revealed an expected average increase of 91 Bcf with a range of 78-106 Bcf. United ICAP was looking for a build of 87 Bcf, and Bentek Energy’s flow model anticipated an injection of 90 Bcf.

“The market is pretty much trading where it was before the number came out. We moved 4 cents down and now we are right back to where we were,” said a New York floor trader. “Natural gas is a pretty tame market right now. Everyone is following oil.”

At Citi Futures Perspective analysts saw the figure as “a moderately bearish surprise. The build was also more than our weather-based model had projected, which will translate into higher rates of injections going forward,” said Tim Evans of Citi Futures Perspective. “It looks as though the background supply-demand balance is at least slightly weaker than the recent flows had suggested.”

Inventories now stand at 3,299 Bcf and are 344 Bcf less than last year and 362 Bcf below the five-year average. In the East Region 49 Bcf was injected, and the West Region saw inventories increase by 10 Bcf. Stocks in the Producing Region rose by 35 Bcf.

The Producing region salt cavern storage figure added 12 Bcf from the previous week to 272 Bcf, while the non-salt cavern figure rose by 23 Bcf to 728 Bcf.

“The EIA reported an injection of 94 Bcf versus market expectations of 88-90 BCF for the past week,” said Phillip Golden, director of risk and product management at Energy Market Exchange (EMEX) in Houston. “This bearish report immediately turned the gas market down $0.02/MMBtu, which is a mildly bearish move. This further suggests that we are near or at a floor as a bearish injection this late in the season would typically produce a greater a greater downward move in the market.”

Despite the bearish news, Golden said the winter temperature outlook should give bulls hope. “A recent winter weather forecast issued by Accuweather coincides with the Farmer’s Alamanac outlook for this winter, mainly that there will be below-normal temperatures through the Mid-Atlantic and Mid-West again this winter,” he said. “As EMEX has previously advised, clients should be looking to lock in their gas for this coming winter in the next 2-4 weeks to avoid potential price spikes like we saw last winter.”

Looking ahead, Golden said the industry will need injection numbers of 42 Bcf/week to refill storage to the levels expected by the Energy Information Administration, and to get to the high of 2012 we would need to average 203 Bcf/week. “We are not going to reach either the high levels of 2012 levels nor are we going to be at the same level as last year,” he said.

EMEX projects that natural gas at the end of the injection season Nov. 1 will come in right around 3,550 Bcf, which will be the lowest level since 2008, when the country entered the winter with storage at just over 3,400 Bcf. “If we were to revert back to historical averages, we would end this injection season at just over 3,450 Bcf, which would be a very nice recovery from this past winter,” Golden added.