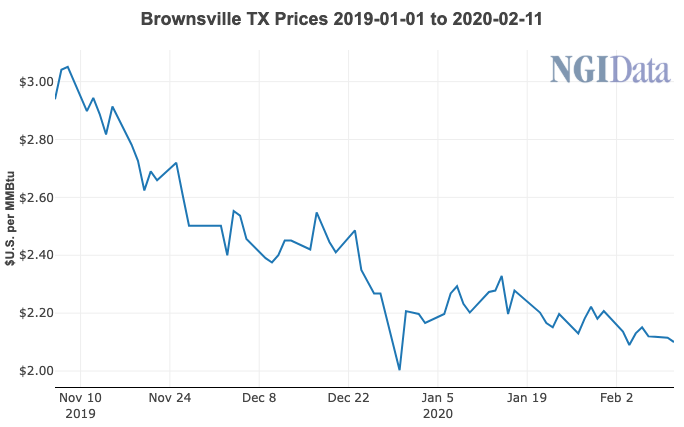 Nestled in the country’s northeastern corner, Tamaulipas shares a 230-mile border with Texas and has about 250 miles of coastline on the Gulf of Mexico, García Cabeza de Vaca noted during an event at Rice University’s Baker Institute for Public Policy.

The Eagle Ford “does not stop at the waters of the Rio Grande,” García Cabeza de Vaca said.

The U.S. portion of the Eagle Ford is expected to produce 1.48 million b/d of oil and 4.93 Bcf/d of natural gas in February, according to analysis last month by the EIA.

The entire country of Mexico, meanwhile, produced 1.71 million b/d of oil and 3.91 Bcf/d of gas in December, according to CNH.

CNH bid rounds 3.2 and 3.3, which were canceled by President Andrés Manuel López Obrador, would have made available both conventional and unconventional gas-rich blocks, mostly in Tamaulipas.

He said Mexico should take advantage of the experience and technical know-how of unconventional operators working in Texas.

“We’re strongly in favor of” the bid rounds, he said. Mexico has “decided to put a pause on that” but “the way I see it is that they’re going to open up. They have to open up because we need the gas, we need the oil…”

He said Pemex and the federal government do not have the funds or experience needed to develop the unconventional resources of Tamaulipas.

“I have talked to the president,” García Cabeza de Vaca said. “I told him, ”Sir, we need those investments. We need the gas, we need the oil…Let the private sector invest.”

The port city of Altamira, meanwhile, is home to one of Mexico’s three liquefied natural gas terminals and also serves offshore operators, including those targeting the Mexico portion of the prolific Perdido Foldbelt ultra-deepwater oil and gas province.

Altamira also is one of three delivery points for the 2.6 Bcf/d Sur de Texas-Tuxpan natural gas pipeline, which entered service in September and spans from Brownsville, TX, to Tuxpan, Veracruz in Mexico.

“The priority that we’re giving to this port is of an energy hub” for the petrochemical, hydrocarbon and power generation segments, he told the audience, highlighting Altamira’s “unbeatable” geographic position.

Altamira also is among the country’s main petrochemical clusters, accounting for 72% of thermoplastic resins nationally, he noted. He also cited the port’s “capability to establish a large storage system for hydrocarbons coming from deep and shallow water production.”

The governor said a port under development at the coastal city of Matamoros, Tamaulipas, south of Brownsville, TX, would be able to better serve offshore operators in the Perdido, namely Australia’s BHP, which operates the Trion field in a partnership with Pemex.

Although Tamaulipas has been a hotbed of violence and organized crime, the governor said his administration’s security strategy “has reduced crime by two-thirds in the past three years.”

“Today Tamaulipas has been singled out as the third out of 32 Mexican states with the best security performance in 2019, with substantial advantages in fighting crime.”