Houston’s Talos Energy Inc., which has envisioned carbon capture projects on the Gulf Coast, clinched an agreement with a Louisiana landowner to lease 26,000 acres along the Mississippi River industrial corridor that may advance one proposal. 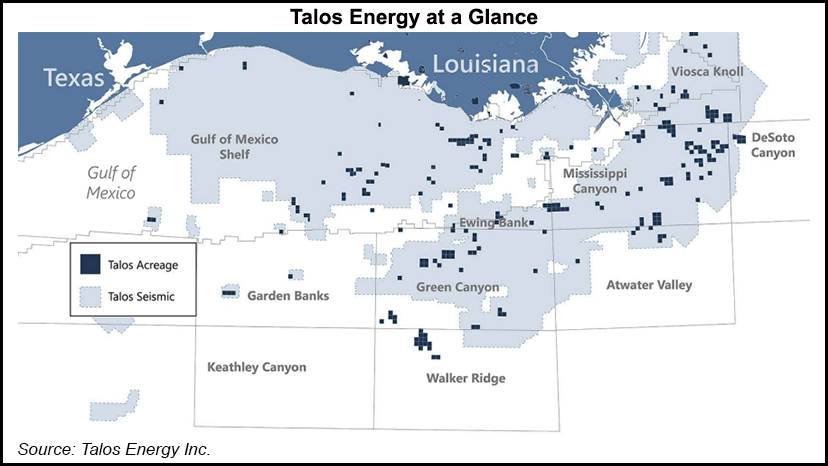 Talos has long focused on developing oil and natural gas in the U.S. and Mexico waters of the Gulf of Mexico. More recently, it began pursuing carbon capture and storage (CCS) opportunities in partnership with UK expert  Storegga Geotechnologies Ltd.

The River Bend CCS project, planned for Iberville in St. James Parish, marks “another milestone on our journey to build out one of the largest portfolios of projects along the U.S. Gulf Coast,” Talos CEO Timothy S. Duncan said.

“This project is unique because the Mississippi River corridor is such an important focus area for lowering industrial emissions,” Duncan said. In bringing together “the right storage location and geology, real pipeline infrastructure, and two credible and capable operators, the River Bend CCS project can be a model for optimizing those variables to achieve a successful integrated CCS project.”

Talos has multiple Gulf Coast CCS projects on the drawing board. Last spring a partnership with Carbonvert Inc. was the sole winning bidder in a Texas General land Office sale for a CCS site in Jefferson County, east of Houston. In October an alliance with TechnipFMC was announced to consider potential Gulf Coast projects. And in November, a preliminary agreement was announced with Freeport LNG, a liquefied natural gas export facility south of Houston, to sequester emissions.

CCS projects are expected to progress “in the coming year,” Duncan said, “through important engineering and permitting phases, while continuing to pursue additional opportunities throughout the Gulf.”

According to Talos, the River Bend project would be in “one of the largest industrial regions in the United States,” within St. James, Assumption and Lafourche parishes. The region emits around 80 million metric tons/year (mmty) of CO2 across the region, according to the company.

The sequestration project as initially designed would comprise three sites, with cumulative storage capacity of 500 mmt-plus.

Talos said it also has secured rights of first refusal on another 63,000 acres in the area for “phased, future expansion” as market demand increases.

Meanwhile, the Biden administration has issued guidance on ways to advance carbon capture utilization and sequestration, aka CCUS,  “responsibly.” The 13-page guidance was prepared by the Council on Environmental Quality (CEQ). The agency is taking comments on the document until March 18.

Proposed CCUS hubs are on the drawing board across the Lower 48, with some of the largest being eyed for the Gulf Coast. The largest one to date is a $10 billion proposal initiated by ExxonMobil, with support from more than a dozen operators, to capture and store millions of CO2 emissions from Houston area petrochemical facilities. Chevron Corp. and Enterprise Products Partners LP also are evaluating possible projects on the Gulf Coast and in the Midcontinent.