Tallgrass Energy Partners LP’s plans to beef up the Cheyenne Hub and build a 70-mile connecting pipeline to accommodate natural gas growth from the Denver Julesburg (DJ) Basin have drawn questions about cost benefits from at least two stakeholders. 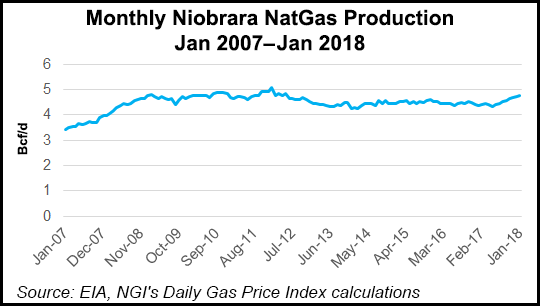 Denver-based Public Service Company of Colorado (PSCo) has asked FERC to convene a technical conference on Tallgrass plans to expand the Rockies Express Pipeline (REX) system because of projected added costs for the Xcel Energy utility and its gas suppliers.

Kinder Morgan Inc.’s Colorado Interstate Gas Co. (CIG) pipeline also argued before the Federal Energy Regulatory Commission that it has an alternative that is cheaper and more efficient.

Last fall, Tallgrass completed an open season for the proposed 70-mile Cheyenne Connector Pipeline and the related Cheyenne Hub upgrade project, based on the projected growth in the DJ as a means to regain REX’s legacy as a west-to-east pipeline.

Tallgrass already has secured long-term precedent agreements from affiliates of leading DJ producer Anadarko Petroleum Corp. and DCP Midstream LP to move 600 MMcf/d on Cheyenne Connector, which could come online by 3Q2019. The projects could potentially add up to 1.3 Bcf/d of capacity into REX west-to-east.

The REX-operated Cheyenne Hub south of the Wyoming-Colorado border is seeking an enhancement project to accommodate firm receipt and delivery interconnectivity among multiple gas pipelines.

In its recent motion to intervene, CIG argued to FERC that regulators have a legal obligation to look at viable alternatives.

“CIG has a viable alternative: to expand its existing pipeline facilities, with very little environmental impact or disruption, and at a significantly reduced cost and at concomitantly reduced rates, to provide the same amount of transportation capacity in the same time frame that is contemplated by Cheyenne Connector,” CIG said in its filing.

PSCo also is contending that the upgrade proposal by Tallgrass does not provide enough detail for the utility “to assess whether, or to what extent, the new facilities will impact PSCo’s current capability to purchase natural gas at the Cheyenne Hub.”

PSCo said the REX application does not demonstrate that any of the new compression units would be used to facilitate or enhance deliveries to the interconnected pipelines, nor explain how the project would provide shippers with “firm access to more natural gas sources.”