Tallgrass Energy LP (TGE) has once again extended open seasons for a pair of projects that would enable crude oil transportation from the Rockies and Oklahoma down to the Gulf Coast for storage or export, management announced Wednesday. 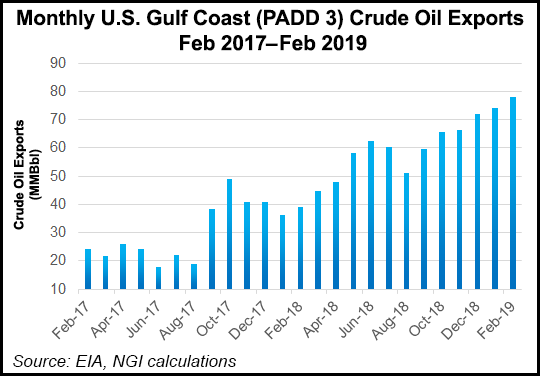 Seahorse is a 700-mile, 800,000 b/d line that would carry crude oil from the Cushing hub in Oklahoma to the St. James, LA, refining complex and TGE’s planned Plaquemines Liquids Terminal (PLT) in Louisiana.

An open season for Seahorse was first launched last August and was due to run through Oct. 1, however, TGE extended the open season first to Nov. 15, then to Jan. 15 and now to May 30. TGE has one potential anchor shipper for Seahorse, and last fall, management indicated that it had signed “between 40 and 50” confidentiality agreements for the project.

Nevertheless, a lot has changed since TGE first announced the Seahorse project, which at the time, was the only pipeline project that was being pursued to move crude from Cushing to the Gulf Coast, according to CFO Gary Brauchle.

“At my last count, there are now seven different projects that are being proposed by others. So that’s complicated the matter to some degree,” Brauchle said. “But I will tell you our path from Cushing to St. James and subsequently down to the PLT has a lot of interesting nuggets along the way, including interconnected pipes, other direct-connected refineries.”

TGE is seeing interest in potential short-haul volumes as well as long-haul volumes down to the Louisiana coastline, and the company is in negotiations with aggregators, end users and other pipes to potentially fill the project and progress it to a final investment decision in a “hopefully rapid fashion,” Brauchle said.

TGE CEO David Dehaemers added that the company needs “another anchor shipper, who we are talking to, to go as firm as the first one did.”

The oil and natural gas midstream company also extended to May 30 the joint open season launched in November for crude oil transportation under a joint tariff between the Pony Express and Seahorse pipelines from Guernsey, WY, and Denver-Julesburg (DJ) Basin origin points to the St. James complex and PLT. TGE remains in discussions with a number of potential counterparties that could anchor the project, management said.

Earlier this month, the midstreamer announced an open season that will run through May 15 for the Hartford Lateral, a new 12-inch diameter, 30-mile long pipeline that will extend Pony Express’ reach into the DJ and Weld County, CO. Sufficient interest arose during Pony Express’ existing open season for expansion capacity from origin points in Colorado and Wyoming to destinations along the system to justify the Hereford Project as a stand-alone project, according to management.

“The project is backstopped by firm commitments to underwrite the project, and we are currently in an open season to solicit” equipment commitments, Moler said.

Last year, TGE completed pump optimization projects that expanded Pony Express capacity to carry up to 400,000 b/d amid continued growth in the Powder River, Denver-Julesburg and Bakken producing regions. Another expansion is expected to boost capacity up to 420,000 b/d by late summer.

Meanwhile, TGE is taking linefill on the 100,000 b/d Iron Horse Pipeline in the Powder River Basin and nearing completion of the associated terminal assets with an expected in-service date for both by the end of May.

The company is also nearing completion on the Grasslands Terminal at the head end of its Platteville line, which will allow TGE to nearly double the capacity of the Platteville extension.

As for the company’s crude oil business segment, volumes averaged around 336,000 b/d during the first quarter, while throughput for April was estimated at just under 370,000 b/d. Management expects throughput in May to again average around 370,000 b/d.

As for its fully subscribed 600 MMcf/d Cheyenne Connector natural gas project, TGE expects to receive its FERC certificate “anytime now” and plans to go into construction immediately thereafter with an eye on a 4Q2019 in-service. The project has drawn criticism in recent weeks by the Denver-based Public Service Company of Colorado (PSCo), which said that the proposal would raise its costs for purchasing gas there.

TGE filed with the Federal Energy Regulatory Commission in March for both the Cheyenne Connector and the Cheyenne Hub Enhancement projects, which together would enable REX to tap additional volumes of natural gas from the DJ for transport west-to-east.

TGE’s planned startup for the Cheyenne Connector coincides with some of its contract roll-offs on Rockies Express Pipeline (REX), although more than 30% of the roll-offs have been recontracted, according to Dehaemers. “I think the others are waiting to make sure that there is sufficient supply sitting at Cheyenne to get into REX at the time that those contracts expire before they renew.”